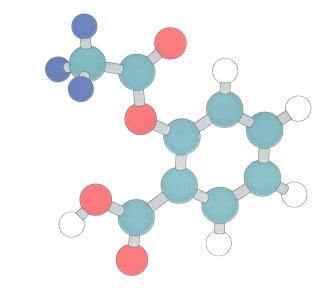 CRYSTALLOGRAPHIC IMAGING OF A MOLECULAR CRYSTAL :
Aspirin C8H5O4-CH2D
R.J. Papoular1, W. Paulus 1, P. Schiebel2, W. Prandl2, H. Zimmerman3, A. Detken3, U. Haeberlen3
1Laboratoire Léon Brillouin (CEA-CNRS)2Institut für Kristallographie, Universität Tübingen, Charlottenstr. 33, D-72070 Tübingen3Max-Plank Institut für medizinische Forschung, D-69120 Heidelberg The nuclear density distribution of partially deuterated aspirin at 300 K and at 15 K has been determined by single-crystalneutron diffraction coupled with Maximum Entropy image reconstruction (MEM). While fully protonated and deuteratedmethyl groups in aspirin (acetylsalicylic acid) have been shown to be delocalized at low temperature due to quantummechanical tunnelling, we provide here direct experimental evidence that in partially deuterated aspirin-CH2D the methyl groupsare orientationally ordered at 15 K whilst randomly distributed over three sites at 300 K. This is the first observation of lowtemperature isotopic ordering in condensed matter by diffraction methods.
PHYSICAL BACKGROUND
isotopically mixed methyl groups perform thermally The quantum mechanical behavior of ever larger and activated stochastic reorientations between the three heavier molecules and molecular subunits in potential wells. Upon cooling, the rate of the condensed matter is a subject of considerable reorientations naturally slows down. What happens at interest . The onset of quantum behavior is usually low temperature depends crucially on the isotopic observed at low temperature. Substitution of hydrogen composition of the methyl group. For CH 3 and CD3, with deuterium leads to large isotopic effects, in fact coherent rotational tunnelling was inferred from NMR the largest ones known in chemical physics.
experiments. This implies that the wavefunction Spectroscopic methods such as NMR and QENS are describing the methyl group is such that the three the prevalent tools to investigate these phenomena.
protons, respectively deuterons, are completely The rotational dynamics of molecules or side groups delocalized over three sites. By contrast, partial such as methyl groups is a very sensitive probe of the ordering, which implies localization as well as a rapid interatomic forces in crystals. Rotating a methyl incoherent process between the almost degenerate group about the bond connecting it to the rest of the upper two of the three wells were suggested for molecule makes it experience a rotational hindering CH2D, again on the basis of NMR results .
potential which arises from the interactions of the As shown below, Neutron Diffraction provides a methyl hydrogens with their surroundings.
direct check of the indirect NMR hints [2-4].
This potential has at least three wells due to themolecular symmetry. At moderately hightemperatures, the methyl groups undergo thermallyactivated reorientations between all three wells,whereas at low temperature, say below 30 K, thedynamics of the methyl groups is usually dominatedby rotational quantum tunnelling [1].
While the dynamics of isotopically uniform methylgroups is by now well understood, little attention hasbeen paid so far to the isotopically mixed CHD2 andCH2D groups. Due to the loss of the three foldpermutation symmetry in the latter, dramaticdifferences in the dynamical behavior are expected.
WHY ASPIRIN ?
A well-studied case of the dynamics of the CH3 and
CD3 groups is that of aspirin C8H5O4-CH3 and
C8H5O4-CD3. The observation of rotational tunnelling
in this compound by NMR triggered a whole series
of studies concerned with the potential and with the
dynamics of these methyl groups. These studies show
Figure 1. The aspirin molecule. Carbon and oxygen atoms that from room temperature down to about 35 K the are shown in blue-green and red. The hydrogen atoms per-protonated, the per-deuterated as well as the from the methyl group are shown in blue and the 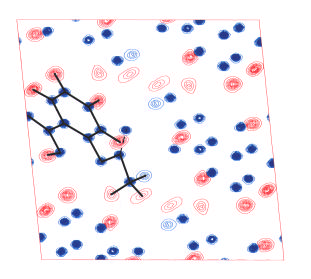 remaining protons attached to the backbone are shown map reveal any contribution from either the methyl protons or deuterons. Any information about these SINGLE-CRYSTAL NEUTRON DIFFRACTION
latter hydrogens (which is definitely present in our This technique allows us to measure the nuclear data) is swamped by the inherent residual noise due to density distribution within the crystallographic unit cell. This distribution is given by the probability density Taking this model which does not include methyl function of finding a nucleus at a given position, hydrogens as the starting point for the LT structure multiplied by the coherent neutron scattering length b refinement, two proton positions and one deuterium of that nucleus. The probability density function position are easily located by their negative and relates to an average over space and time, i.e. over positive contributions in the difference Fourier map the volume of the sample and over the duration of the calculated by SHELXL97. Including these in the measurement. In case dynamic processes are structural model without any bond length or bond involved, then neutron diffraction yields a direct long angle constraint yields a good final agreement factor time exposure of those processes. Due to the opposite signs of the neutron scattering length ofprotons and deuterons ( bH=-3.74 fm, bD=6.67 fm), MAXIMUM ENTROPY IMAGING
the former yield a negative contribution to the nuclear We are specifically interested in the nuclear density scattering density, in contrast to the latter. Thus distribution arising from the methyl hydrogens. Since neutron diffraction is an excellent tool for conventional Fourier syntheses would not reveal the distinguishing protons from deuterons, and hence for latter when used on our room temperature data, we studying isotopic ordering processes such as those reconstruction method (MEM) to both our LT and RTdata sets. We use our program GIFT (Generalized A ZERO AVERAGE CONTRAST SAMPLE
Inverse Fourier Transforms) which makes use of the In order to improve the visibility of the alleged H/D orientational order of the methyl groups at low A projection of the 3D MEM-reconstructed nuclear temperature, we aimed at an aspirin-CX3 sample with density distribution along the monoclinic b-axis based an average scattering length <bX> of zero.
on our 15 K data set is shown in Fig.2.
Consequently the single-site nuclear scattering lengthis expected to be close to zero for a randomorientational distribution, for which there will hardly beany coherent scattering from the methyl hydrogens.
On the other hand, if ordering occurs, it will then berevealed by positive bumps and negative holes in thenuclear density distribution .
OUR EXPERIMENT
To test the above-mentioned ideas, we collected data
sets from our crystal at 300 K and at 15 K on the
four-circle 5C2 diffractometer (λ = 0.8302 Å) at
LLB. At both temperatures the crystal was found to
be isomorphous to normal protonated aspirin, which
had been examined much earlier by X-ray diffraction
[5]. The crystal is monoclinic, of space-group P21/c
with 4 molecular units per unit cell.
We used a crystal from a previous NMR study[3], and
for which the requirement <bX> =0 is nearly met. In
Figure 2. : Experimental nuclear density distribution of fact, <bX> ≈ -0.6 fm, about 11 times smaller than partially deuterated aspirin (acetylsalicylic acid) at 15 K projected along the monoclinic b-axis. Red contours D>. A further complication arises from the fact that our sample comprises approximately 70% CH pertain to protons, which have a negative scattering length, in contrast to deuterium, carbon and oxygen atoms shown here in blue. The solid line delineates asingle aspirin molecule. LEAST-SQUARES RESULTS
The program SHELXL97 was used for refinements.
Similarly, the two sections shown below in Fig.3a,b As expected, neither could methyl hydrogen positions be found, nor did the calculated difference Fourier reconstructions of the asymmetric unit of the aspirin 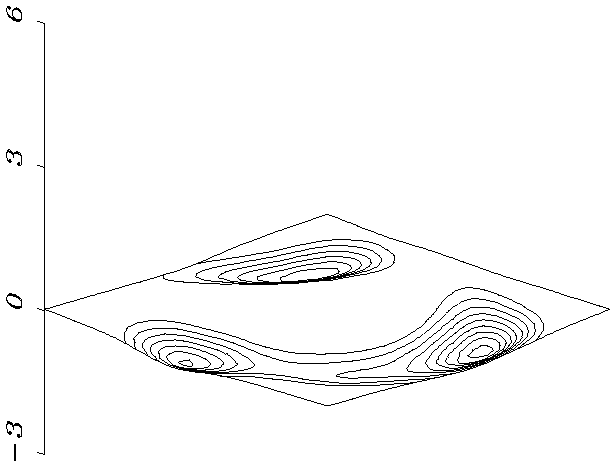 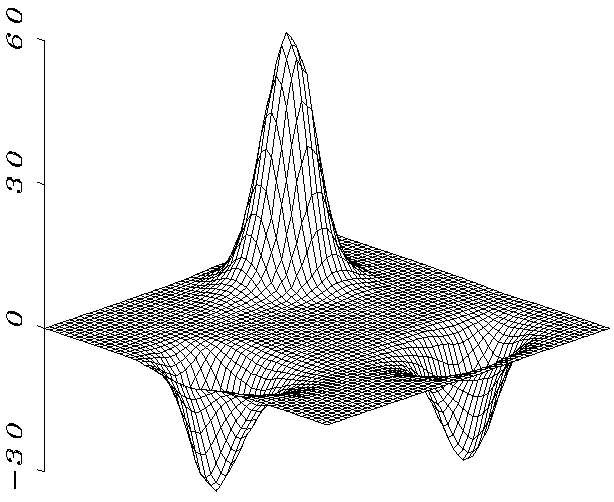 crystal by making use of MEM rather thanconventional Fourier syntheses. Three dramaticimprovements arise : (a) noise suppression, (b)flexibility to use non-uniform prior densities and (c)possibility to tackle partially phased data sets. In thepresent case, there is no phase problem : the phasesof the structure factors are perfectly determined bythe well-behaved atoms known from the X-ray studyby Wheatley[5]. The decisive point is that MEMenables us to locate the methyl hydrogen even atroom temperature. This is demonstrated in Fig.3a, inwhich a section of the nuclear density distributionfunction through the plane of the methyl hydrogens isdisplayed. Three holes, all negative as they should besince <bX> < 0, are clearly seen. Despite being veryshallow, the three minima are robustly reconstructedby MEM. No matter how the reconstruction is carriedout, with or without non-uniform prior scattering FIG.3a. MEM section of the nuclear density distribution length densities , the three minima are consistently through the methyl hydrogens of aspirin obtained from the reproduced. No prior knowledge about the hydrogen 300 K data set. Note the three shallow minima of almost positions, available in principle from the 15 K data, equal depth. They evidence the random occupation of the was used in reconstructing this density distribution. It three methyl hydrogen sites by the protons and deuteronswith weights corresponding to the isotopic composition of demonstrates the superior power of MEM over both the crystal (see text). The residual (positive) contribution standard Fourier and least-square techniques and due to the thermal motion of the carbon atom of the CX3 provides clear evidence of the random distribution of group has been removed numerically. (density unit : the methyl protons and deuterons at 300 K over three geometrically well-defined sites.
In Fig.3b, we finally show the nuclear densitydistribution at 15 K for the same section as in Fig.3a,again reconstructed by MEM. The clear message ofthis figure is that the methyl protons and deuteron inaspirin-CH2D are well-ordered at 15 K. The deuteronobviously occupies with high preference the siteassociated with the large positive bump whereas theprotons occupy almost exclusively the sites related tothe negative holes. Truly, the localization of themethyl hydrogens at 15 K is also detectable instandard Fourier maps, albeit with a sizablebackground noise.
COPING WITH THE ISOTOPIC MIXTURE
Quantitatively, the density distribution displayed in
Fig.3b corresponds to the [70%-19%-10%-1%]
FIG.3b. MEM section of the nuclear density distribution superposition of the four isotopic species mentioned through the methyl hydrogens of aspirin from the 15 K earlier. This results in effective occupancies for both
data set. Note that the vertical scale has been changed by H and D different from unity when an assumed a factor of 10 in comparison with that in Fig.3a. The graph demonstrates the orientational ordering at 15 K of We find 0.7, 0.7 and 0.53 for the two protons and the the most abundant methyl isotopomer, CH2D in our crystal deuterium respectively. It can then be deduced that sample. The deuteron occupies almost exclusively the siterelated to the (positive) bump while the protons the probability of finding a deuteron from the CH2D preferentially occupy the two sites associated with isotopic species at the position evidenced by the (negative) holes. (density unit : fm/A3) positive bump seen in Fig.3b is at least equal to 0.86.
References
[1] M.Prager, A.Heidemann, Chem.Rev. 97, 2933 (1997)
[2] A.Detken et al, Z. Naturforsch. 50a, 95 (1995)
[3,4] A.Detken , J.Chem.Phys.108, 5845,109,6791(1998)