NeuroImage 11, 334–340 (2000)
doi:10.1006/nimg.1999.0536, available online at http://www.idealibrary.com on
Differential Effects of Muscle Contraction from Various Body Parts on Yung-Yang Lin,*,†,‡ Cristina Simo˜es,* Nina Forss,* and Riitta Hari* *Brain Research Unit, Low Temperature Laboratory, Helsinki University of Technology, P.O. Box 2200, FIN-02015 HUT Espoo, Finland; †Neurological Institute, Veterans General Hospital-Taipei, Taipei 11217, Taiwan; and ‡Department of Neurology, National Yang-Ming University School of Medicine, Taipei, Taiwan The early somatosensory-evoked potentials (SEPs) to We studied eight healthy subjects with a whole-scalp
median nerve stimulation may either increase or de- 306-channel neuromagnetometer to explore the effect
crease during active exploratory finger movements (Cohen of motor activity from different body parts on somato-
and Starr, 1987; Knecht et al., 1993). Enhancement of SII sensory responses to left median nerve stimulation.
activation has been observed during finger movements The stimuli produced clear tactile sensation without
(Huttunen et al., 1996) and sustained contraction of the any motor movement. In the rest condition, the subject
thenar muscles (Forss and Jousma¨ki, 1998). The interac- had no task. During contraction conditions, the sub-
tion of different sensory inputs is likely to take place at the ject had to maintain submaximal isometric contrac-
sensorimotor cortices (Huttunen et al., 1992; Hsieh et al., tion in masseter, left deltoid, left thenar, or left tibialis
1995). The aim of the present study was to find out how muscles. Short-latency responses from the primary
isometric contraction of different muscles influences somatosensory cortex did not change during contrac-
the activation of the somatosensory cortices.
tion. Responses from both the right (contralateral) and
left second somatosensory cortices (SII) were signifi-
cantly enhanced during contraction of the left thenar
MATERIALS AND METHODS
muscles. Responses from the left SII were significantly
enhanced also during contraction of the left deltoid
Somatosensory-evoked magnetic fields (SEFs) were muscles, but they were decreased during contraction
recorded from eight healthy right-handed subjects (five of the masseter and left tibialis anterior muscles. This
males, three females; mean age 32 years, range 28–38 study implies that SII activation is modulated by mo-
years). During the recording, the subject was sitting tor activity and that the effect depends on the topo-
comfortably in a magnetically shielded room with the graphical proximity of the stimulated and contracted
head leaning against the helmet-shaped neuromagn- body parts.
௠ 2000 Academic Press
etometer. All subjects were experienced in SEF measure- Key Words: evoked field; magnetoencephalography;
ments, and they were instructed to keep eyes fixed muscle contraction; somatosensory; human.
forward and to ignore the median nerve stimuli.
The left median nerve was stimulated with 0.3-ms constant current pulses once every 2 s. The stimulus INTRODUCTION
intensity was adjusted during the rest condition toproduce a visible twitch of the thumb. We first recorded Functions of somatosensory and motor cortices are SEFs with a stimulus intensity clearly exceeding the closely related. The primary motor cortex receives motor threshold (6–9 mA, mean 7 mA) to elicit cortical somatosensory inputs from the thalamus and from the responses with excellent signal-to-noise ratio. Then, primary and second somatosensory cortices SI and SII the intensity of the stimulus was decreased (3–5 mA, (Jones and Powell, 1968; Zarzecki et al., 1978). On the mean 4 mA) to produce clear tactile sensation without other hand, both SI and SII contribute to the pyramidal any motor movement. SEFs were recorded during five tract output to modulate motor unit function (Wiesen- different conditions: (i) rest without voluntary contrac- danger, 1981). Appropriate integration of the sensorimo- tion, (ii) contraction of the masseter muscles, (iii) tor signals is indispensible for the performance of contraction of the left deltoid muscles, (iv) contraction of the left thenar muscles, and (v) contraction of the left Voluntary movement affects the ability to perceive tibialis anterior muscles. The order of these conditions stimulation from the moving body part (Coquery et al., was randomized over subjects. Before the experiment, 1972; Garland et al., 1972; Angel and Malenka, 1982).
the subject was instructed to bite moderately with 1053-8119/00 $35.00Copyright ௠ 2000 by Academic Press All rights of reproduction in any form reserved. 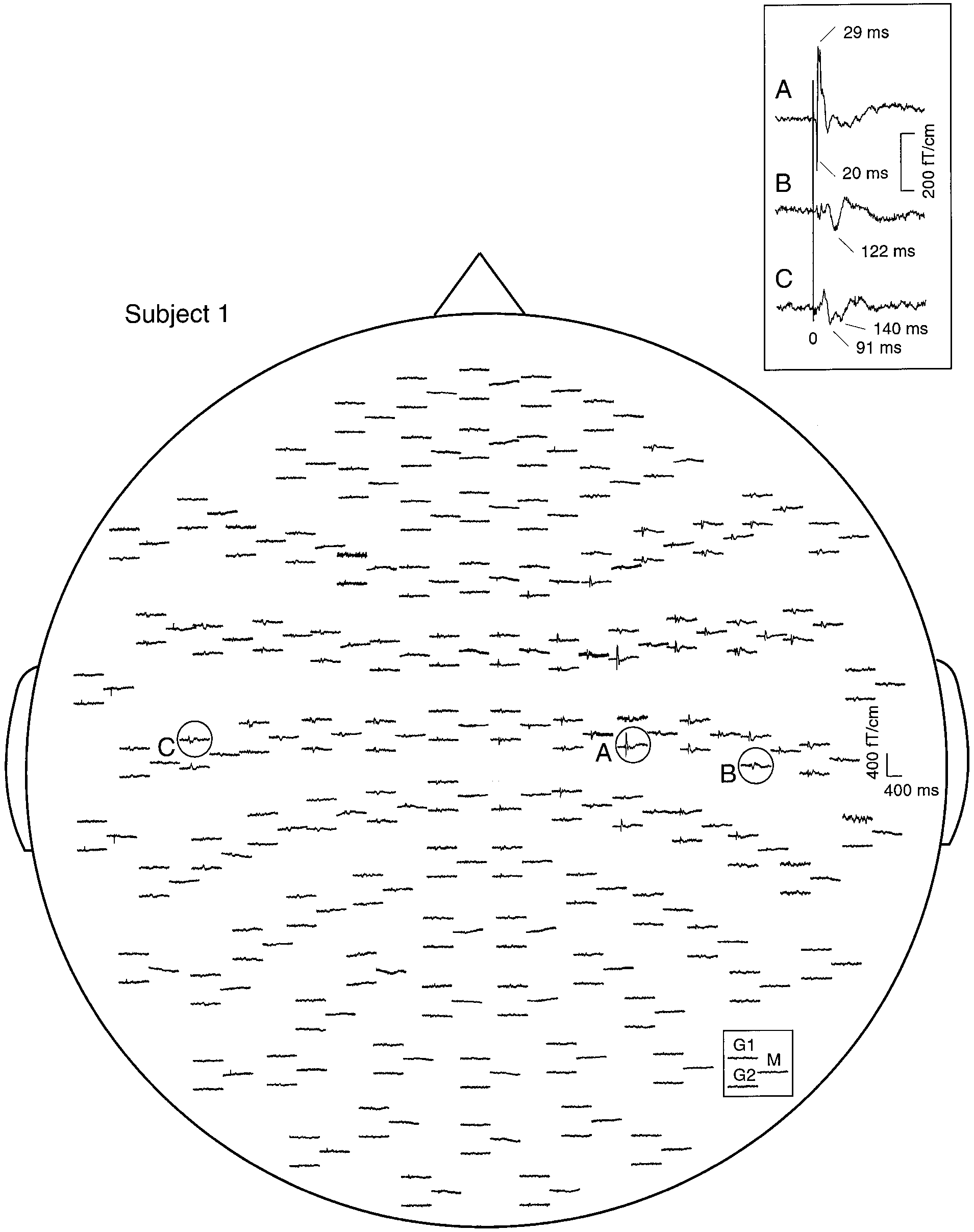 SEFs of subject 1 to left median nerve stimulation with the stimulus intensity above motor threshold. In each response triplet, the left traces illustrate signals recorded by the two orthogonal gradiometers (G1 and G2), and the right trace by the magnetometer (M) of a singlesensor unit. The insert shows enlarged responses from the three encircled areas. The vertical line indicates the stimulus onset. 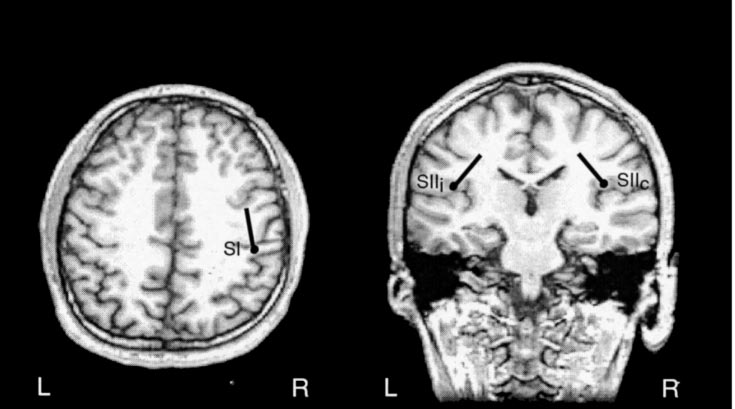 Generators of SEFs and the explanation of the responses by a 3-dipole model in subject 1. The left and middle panels show the locations of sources superimposed on horizontal and coronal MRI slices, respectively. SI refers to the generator site of N20m, and SIIc and SIIirefer to the contra- and ipsilateral SII, respectively. L, left; R, right. The right panel shows the measured responses (solid lines) from the insertof Fig. 1, superimposed by the wave forms (dotted lines) predicted by the 3-dipole model.
front teeth for masseter activation and to keep a measured signals, deflections exceeding the prestimu- comfortable posture during limb muscle contraction.
lus noise level, about 5 fT/(cmͱHz), were first visually The contractions were monitored throughout the measure- searched to select the time windows and cortical areas ments with surface electromyograms and video camera of interest for further analysis. During these time recordings. Care was taken to avoid any change in the windows (from the beginning of the deflection to its contact of the stimulator with the skin. None of the subjects return to the baseline level) the magnetic field patterns complained of muscle fatigue after the experiment.
were first visually surveyed in 2-ms steps to create the SEFs were recorded with a helmet-shaped 306- initial guess of the number of active sources within that channel detector array (Vectorview, Neuromag Ltd, time period and to estimate the stability of the dipolar Helsinki, Finland), which comprises 102 identical triple magnetic field pattern. The equivalent current dipoles sensor elements. Each sensor element consists of two (ECDs), best describing the measured data, were found orthogonal planar gradiometers and one magnetometer by a least-squares search using subsets of 16–18 chan- coupled to a multi-SQUID (Superconducting QUantum nels around the maximum responses. These calcula- Interference Device) and thus provides three indepen- tions resulted in the 3-D locations, orientations, and dent measurements of the magnetic fields. The exact strengths of the ECDs in a spherical conductor model, location of the head with respect to the sensors was which was based on subjects’ MR images. Goodness- found by measuring the magnetic signals produced by of-fit of the model was calculated and only ECDs currents led to four head indicator coils placed at explaining more than 85% of the field variance at known sites on the scalp. The locations of the coils with selected periods of time over a subset of channels were respect to anatomical landmarks on the head were determined with a 3-D digitizer to allow alignment of After identifying the single dipoles, the analysis the MEG and magnetic resonance (MR) image coordi-nate systems. MR images of the subjects’ brains were acquired with a 1.5-T Siemens Magnetom scanner.
The signals were bandpass filtered (0.03–200 Hz) Mean Coordinates (ϮSEM) of the Sources to Left Median and digitized at 600 Hz. The analysis period of 800 ms Nerve Stimulation. The Positive x-, y-, and z-Axes Go To- included a prestimulus baseline of 200 ms, and about wards the Right Preauricular Point, the Nasion and the 120 responses were averaged for each condition. Ep- ochs coinciding with signals exceeding 150 µV in the simultaneously recorded vertical electro-oculogram(EOG) were automatically rejected from the analysis.
The source analysis was based on signals recorded by the 204 gradiometers. To identify the sources of the 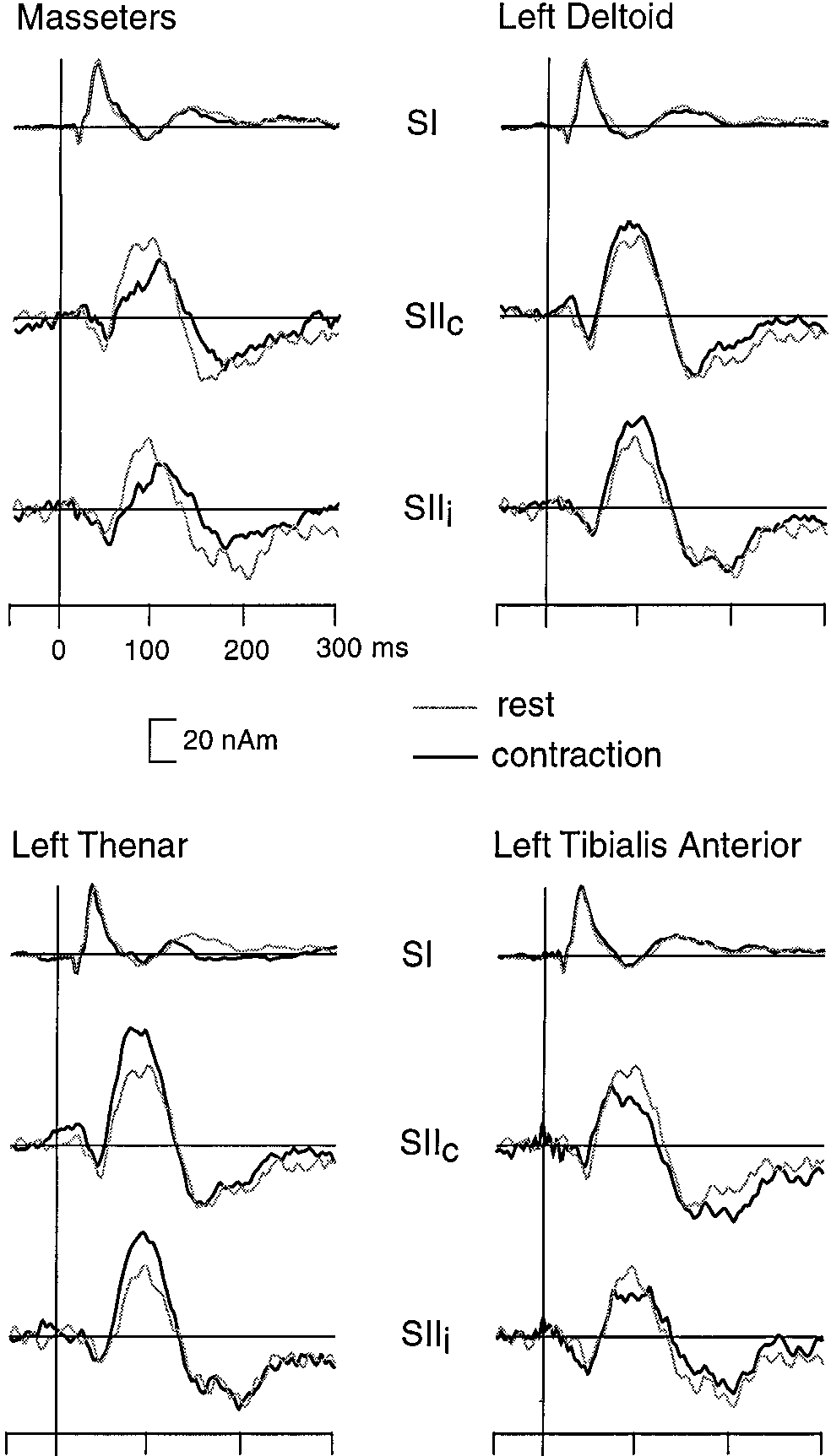 period was extended to the entire measurement epoch applied in his or her individual multidipole model.
and all channels were taken into account in computing However, the effect of isometric muscle contraction was a time-varying multi-dipole model; the strengths of the quantified only on the SI and SII activations.
previously found ECDs were allowed to change as a Figure 3 shows the SI and SII source waveforms of function of time while their locations and orientations subject 2 during all conditions. The early (20–39 ms) SI were kept fixed. The validity of the multi-dipole model responses did not clearly change, but the SII responses was evaluated by comparing the measured signals with were differently affected by contraction of various responses predicted by the model. If signals of any muscles. In line with a previous study (Forss and brain region were left inadequately explained by the Jousma¨ki, 1998), contraction of the left thenar muscles model, the data were reevaluated for more accurate enhanced the SII responses bilaterally. Contraction of estimation of the generator areas. This approach, ex- the left deltoid muscles also enhanced the SII re- plained previously in detail (Ha¨ma¨la¨inen et al., 1993), sponses, although the effect was weaker. In contrast, has been successfully used in several of our previous contraction of the masseter and left tibialis anterior studies (Hari et al., 1993; Forss et al., 1994a; Forss and muscles slightly decreased the SII responses.
Jousma¨ki, 1998; Nishitani et al., 1999). The individual Figure 4 shows the mean (ϩSEM; eight subjects) dipole model derived from responses to stimuli abovemotor threshold was applied to data of all conditions.
Statistical significance of results was tested by Stu- dent’s paired two-tailed t test.
Figure 1 shows the distribution of SEFs elicited by stimulation of the left median nerve above motorthreshold in subject 1. Several local maxima of themagnetic field gradients suggest that the stimuli acti-vate several source areas. The earliest deflection N20m,peaking at 20 ms and corresponding to N20 in electricmeasurements, occurred over the right anterior pari-etal cortex (A), followed by P35m at 29 ms. Longer-latency responses peaked over the contralateral tempo-ral region at 122 ms (B) and over the ipsilateraltemporal region at 91 and 140 ms (C).
Figure 2 shows the locations of the source areas superimposed on the MR images of the same subject.
The 3-dipole model (one dipole in SI and two bilaterallyin SII) explained adequately all responses; a singledipole in SI explained satisfactorily both N20m andP35m responses. N20m and P35m were generated inthe postcentral wall of the central fissure. The longer-latency responses were generated bilaterally in theupper lips of the Sylvian fissure in parietal operculum.
These generator areas agree with the activation of SIand SII cortices reported in previous magnetoencepha-lographic studies (Hari et al., 1984, 1990; Tiihonen etal., 1989; Forss and Jousma¨ki, 1998). The dipole coordi-nates (Table 1) show on average 5 mm more posteriorSII location in the left than the right hemisphere(P Ͻ 0.05) and are in line with those reported previ-ously (Forss et al., 1994b).
In addition to the activation of the contralateral SI and of the ipsilateral and contralateral SII, the somato-sensory stimuli also activated the posterior parietal Strengths of the contralateral SI and the contra- and cortex in two subjects and the mesial paracentral lobule ipsilateral SII (SIIc and SIIi) responses of subject 2 as a function of in 1 subject, as reported previously (Forss et al., 1994a, time during rest (gray, thin lines) and different contraction conditions 1996). All source areas found in each subject were 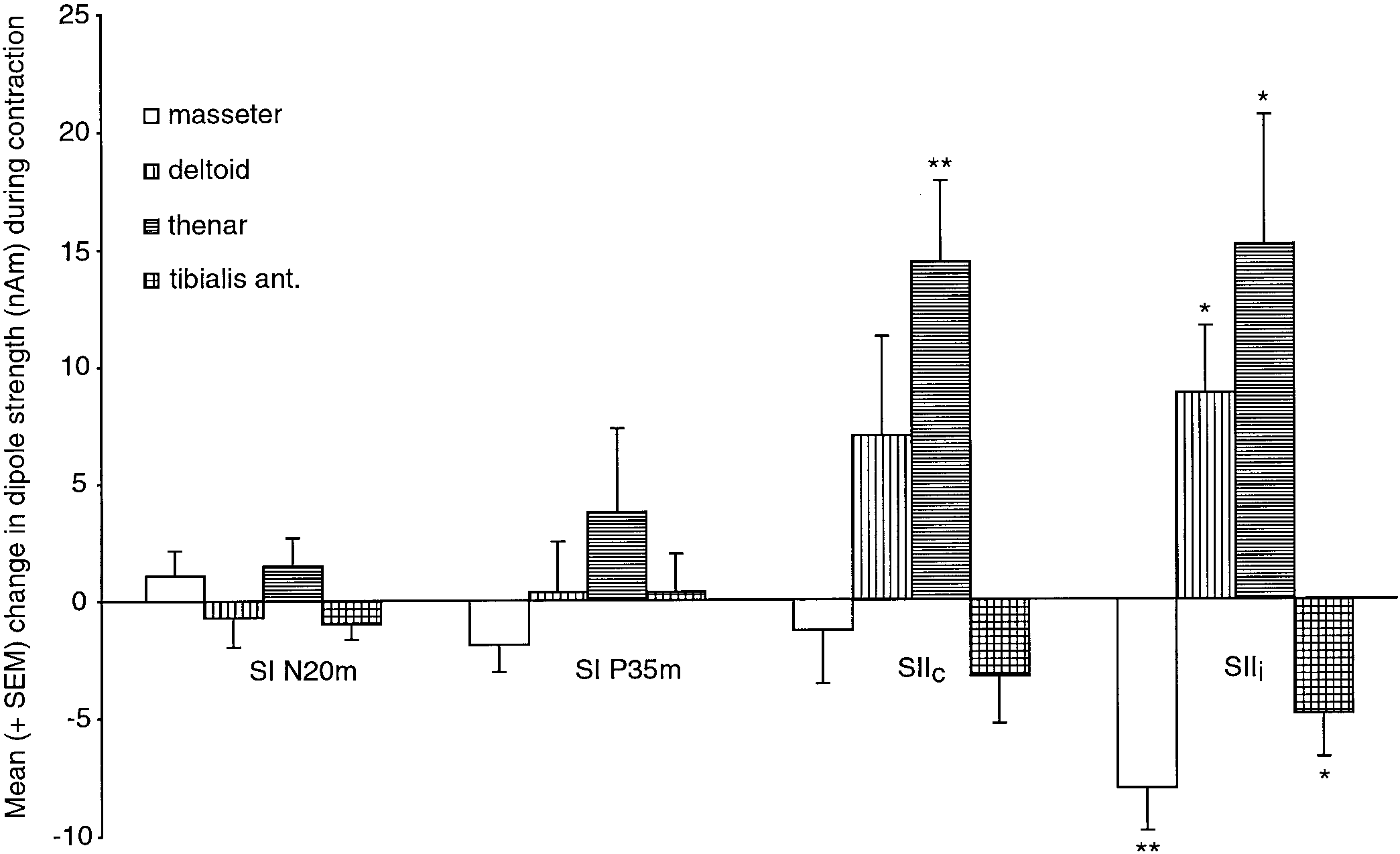 • ED is a symptom of many underlying conditions • Endothelial dysfunction seems to be a common final pathway to ED in patients with hyperlipidemia, diabetes mellitus, hypertension, and chronic renal failure• The recognition of ED as a warning sign of silent vascular disease has led to the concept that a man with ED and no cardiac symptoms is a cardiac patient until proven otherwise

Lane Departures Who is at risk? Head-on collisions and other types of lane depar-ture crashes can happen to anyone at any time. But Crashes that begin with the vehicle running off the specifi c groups most at risk include males age 26 pavement or otherwise departing from the lane of to 35, drivers on rural roads and those on the road travel are a leadi