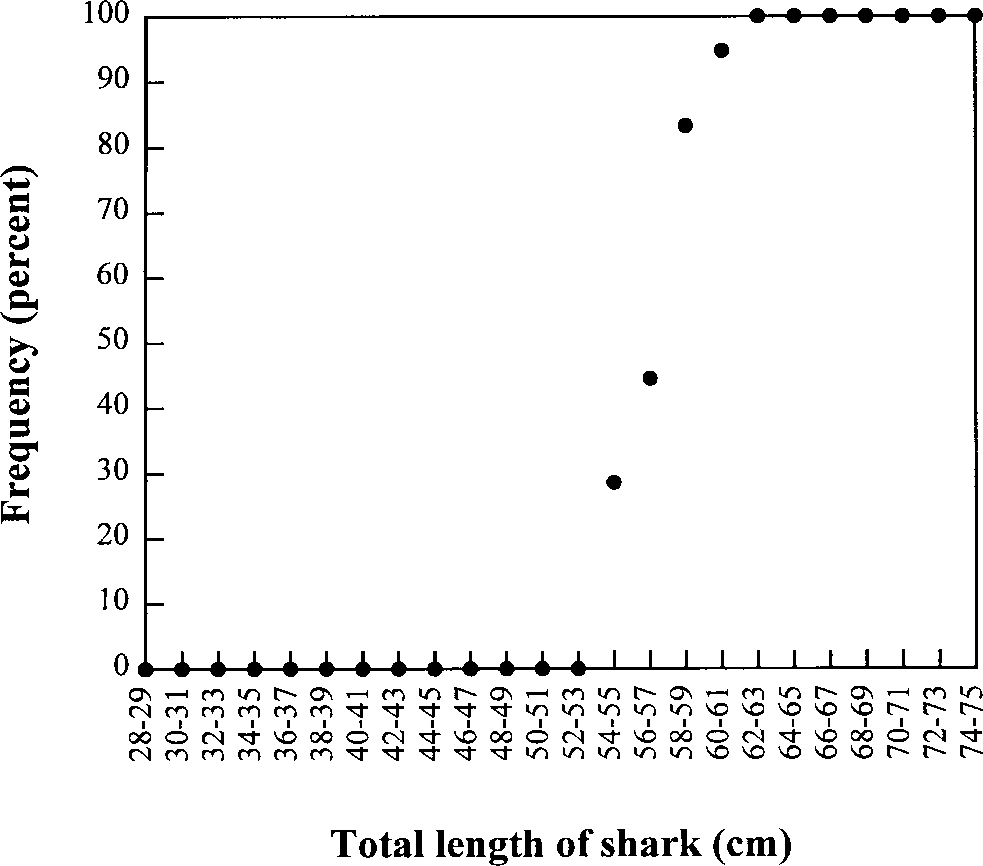 M.R. HEUPEL ET AL.
TABLE 1. Average monthly water temperatures from Heron stages of spermatogenesis showed the expansion Island Reef recorded by research station staff1 of spermatocysts from stages 1–5 (Fig. 2). Stage 1 cells were generally about 1.0 µm in diameter.
Stage 7 spermatocysts were not measured due to their degenerative state. Sertoli cell size was con- sistent throughout the year and ranged from 0.7– 1.0 µm in diameter. When comparing the size of spermatogenic stages by month it was noted that on average November samples had the largest spermatocysts (i.e., stage 5: 34 mm). Samples from September and December were of similar sizes (stage 5: 30 mm in both), but specimens from Feb- ruary were considerably smaller (stage 5: 16 mm).
A distinct annual cycle in androgen concentra- 1Water temperature was measured daily from the jetty adjacent to tions was observed in male sharks (Fig. 3). Dif- the study site at a depth of 1 m at 8:30 am. Note: the thermometer is ferences in androgen concentrations between attached to a float to maintain a depth of 1 m at all times.
months were statistically significant (Kruskal-Wallace = 48.5, P < 0.01). Hormone concentra- Histological examination of sections of testes tions were significantly lower (P < 0.05) from showed the various stages of sperm production December through February (southern hemi- throughout the year (Table 2). In April sharks had sphere summer) with concentrations of <20 ng/ begun sperm production for the mating season.
ml observed. Concentrations rose gradually and Stages 1–6 were present and 50–75% of sperma- peaked in July–October at about 60 ng/ml before tocytes of individual testes were in stages 3 or 4.
starting to decline in November. There was an In August all stages of sperm production were inverse correlation between androgen concentra- present, with a limited portion of the testis de- tions and water temperature (r2 = 0.93). The high- voted to stages 1 and 7. The epididymis contained est concentrations of androgen coincided with sperm during August–November, with fullness observations of males with red and swollen clasp- appearing to be greatest in November. Testes in ers. Males in this condition were frequently found this condition were observed to be enlarged com- between July to December and were assumed to pared to previous months, and contained about 50% of spermatocysts in stages 5 or 6.
Females
Females were found to mature at approximately 55 cm TL. Females less than 55 cm had thin strap-like ovaries and only small non-yolky ova present.
Females above this size had well developed ova-ries with yolky ova present.
Measurements of 32 oviducal glands from ma- ture females showed a change in size through theyear (Fig. 4). Oviducal glands were smallest inJanuary–April. Subsequently, glands showed anincrease in width during August–November whensharks were reproductively active.
Sizes of vitellogenic ova were variable through- out the year with a range of 3–27 mm (Fig. 5).
Small ova (3–6 mm) were present in all femalesexamined. Females sampled in January had fewlarge ova present, and in February–March femaleshad few ova that appeared to be undergoing re-sorption. By April there were small numbers (10–15 per individual) of yolky ova that were 3–5 mm Percentage of 249 male Hemiscyllium ocellatum in diameter. In August females had at least five with fully calcified claspers as a function of total length.
pairs of large, yolky ova of varying sizes. The larg- 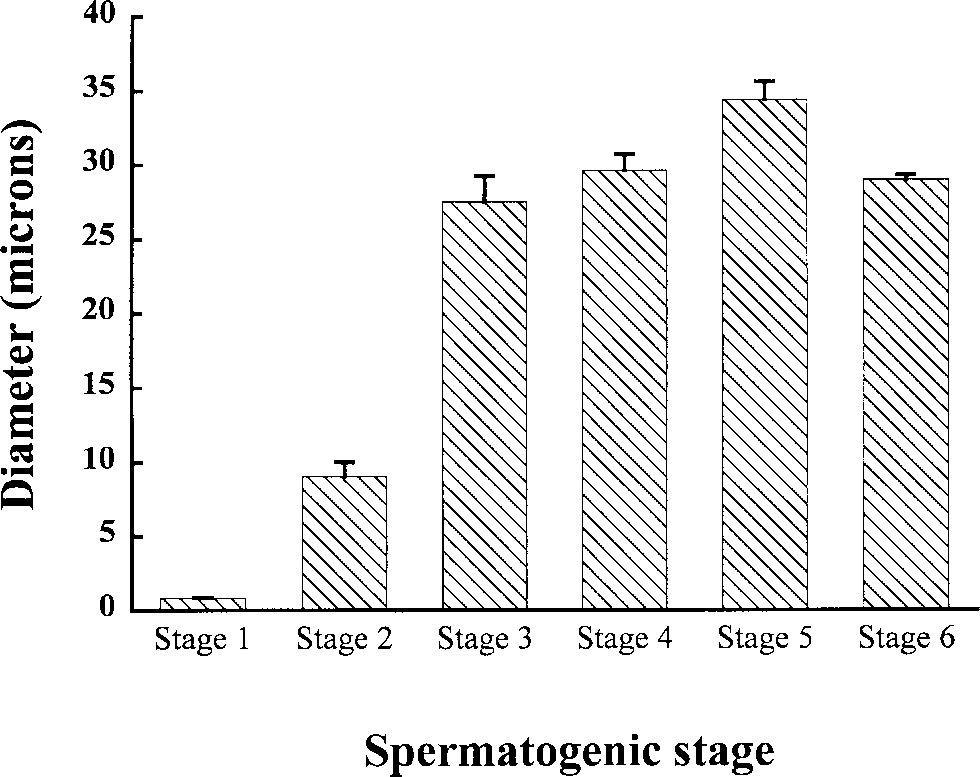 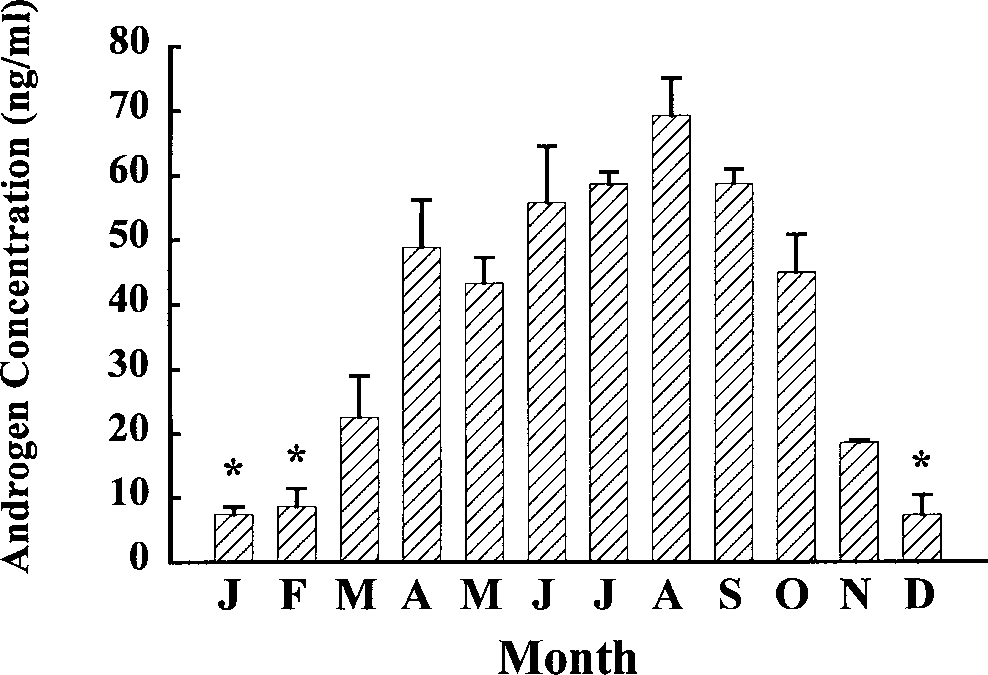 REPRODUCTION IN THE EPAULETTE SHARK
TABLE 2. Testicular activity of mature male Hemiscyllium ocellatum throughout the year indicating presence of sperm and stages of spermatogenesis present est observed ova were about 25–27 mm with all 35 mm, green-brown in color with fine hair-like subsequent pairs smaller. The presence of egg pairs clumps of tendrils that covered the entire surface.
at this stage was observed throughout the remain- Androgen concentrations measured in females der of the breeding season (September–November).
were about an order of magnitude lower than No samples from ovaries were obtained in Decem- those in males (2–8 ng/ml) (Fig. 6a). Androgen con- ber, but pairs of egg capsules were collected from centrations were not significantly different be- females during August, October, November, Decem- tween months (Kruskal-Wallace = 11.8, P = 0.38) ber, and January. Examination of females during and there was no correlation between water tem- tagging excursions revealed gravid or pregnant fe- perature and hormone concentrations (r2 < 0.01).
males from August through early January. Females Estradiol and progesterone appeared to have sea- were also noted to have red, irritated tissue around sonal patterns (Fig. 6b, c). Estradiol concentrations the cloaca during the months of July and August.
were low during the southern autumn and winter This was probably a result of mating activities. It (March–Aug.) with concentrations of 0.05–0.2 ng/ was presumed that ova were ovulated at a size of ml. Concentrations rose to a peak (0.5 ng/ml) in 25–27 mm since this was the largest size of ova spring and early summer (September–November) before declining again in December–February. Es- Egg capsules were produced in pairs with at tradiol concentrations were significantly different least half of the egg capsule formed before ovula- between months (Kruskal-Wallace = 33.1, P < 0.01) tion. One female collected for dissection in August but sample size was not large enough to distin- had partially developed egg capsules within her guish where differences occurred. There was a uterus. The egg capsules were half formed, but weak inverse correlation between water tempera- no ovum had been ovulated. There were several ture and estradiol concentration (r2 = 0.19). Proges- pairs of large yolky ova present in the ovary sug- terone concentrations showed a different cycle by gesting the female was capable of ovulation. Egg peaking in autumn and winter months (June–July) capsules at deposition were approximately 90 × at concentrations up to 0.5 ng/ml. Concentrationsdecreased slightly in September–October and con- Distribution of average monthly androgen concen- Average diameter of spermatocysts in stages 1–6 trations (ng/ml) with standard errors for male H. ocellatum measured from male H. ocellatum in the month of Novem- sampled on Heron Island Reef. Asterisks indicate months with significantly lower (P < 0.05) androgen values. 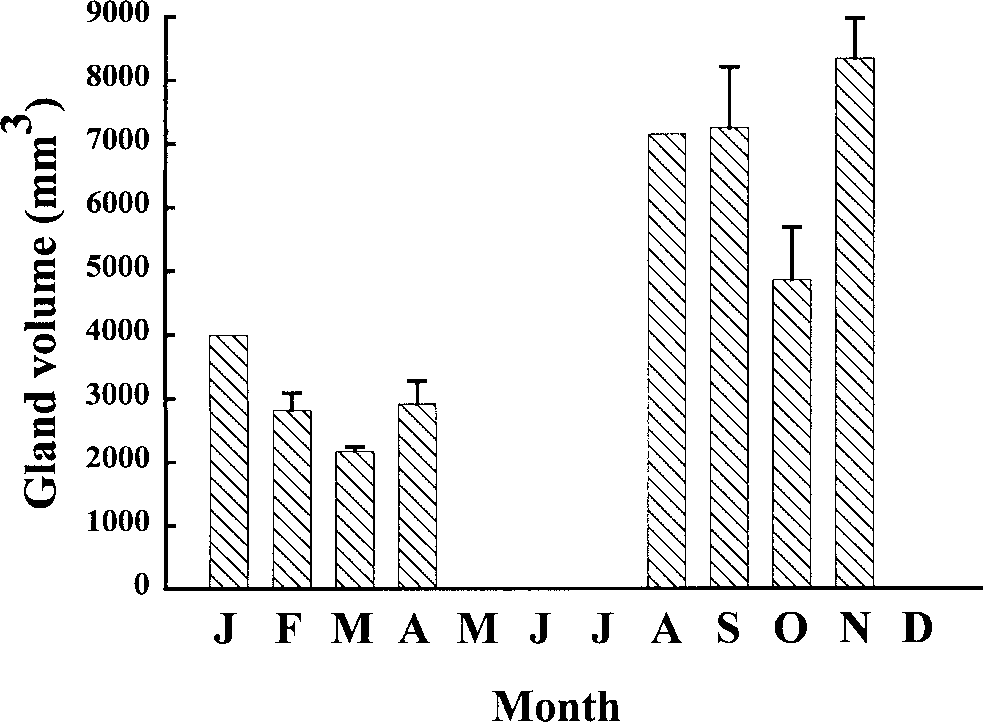 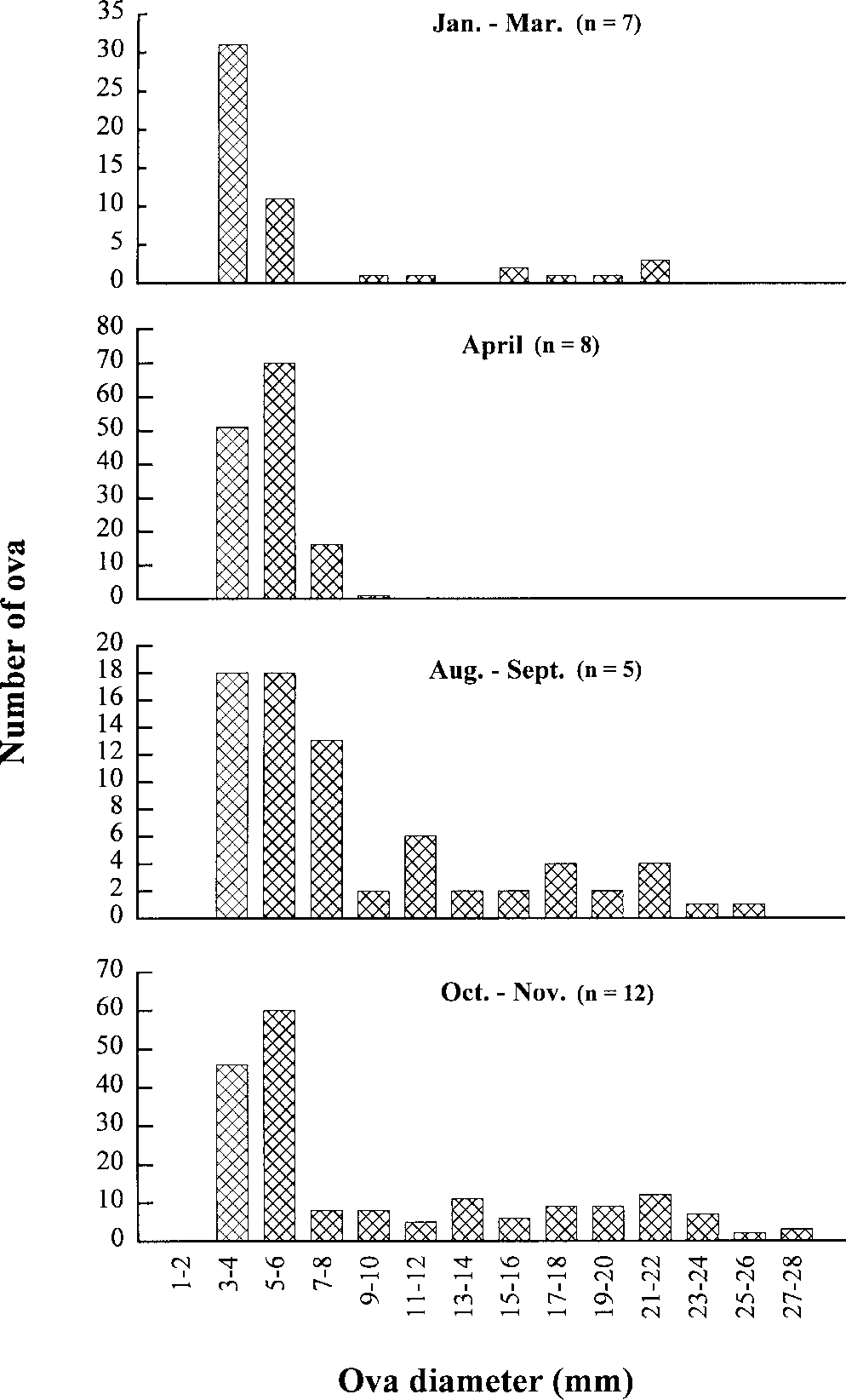 M.R. HEUPEL ET AL.
Yearly volume distribution of oviducal glands from 32 mature female H. ocellatum excluding the months of May,June, July, and December.
tinued this trend through the remainder of theyear. Progesterone concentrations were also sig-nificantly different between months (Kruskal-Wallace = 17.6, P = 0.03) but differences could notbe statistically determined due to restricted samplesizes. There was a slightly stronger inverse corre-lation (r2 = 0.37) to water temperature than thatfor estradiol.
DISCUSSION
Information pertaining to the life history of hemiscyllid sharks in Australian waters is lim-ited. Although these species are commonly ob-served and are generally known to be oviparous(Compagno, ’84; Last and Stevens, ’94), their re- Measurements of ova diameter from 32 mature productive timing and periodicity are unknown.
female H. ocellatum throughout the year. Graphs depict the The limited research available on H. ocellatum in- progression of ovum size, number, and development throughthe year.
cludes one study on sharks maintained in a con-trolled aquarium environment (West and Carter,’90). There are no data available concerning the bonnethead shark, S. tiburo (Manire and Ras- reproductive activities of H. ocellatum in its natu- mussen, ’97). The claspers of mature R. terrae- novae were found to be about 7–8% of total body Male and female H. ocellatum were determined length (Parsons, ’83), similar to the measures to be reproductively mature at similar sizes. This found for H. ocellatum in this study.
was based on male clasper calcification and ex- Histological examination of testes showed that amination of female reproductive tracts. Using cal- sperm production had a seasonal cycle. Testes cification of claspers to determine sexual maturity were found to be inactive during the months of in male sharks has been used in many studies on January–March, a period when androgen concen- elasmobranch species, including the Atlantic trations were at their lowest. Sperm production sharpnose shark, Rhizoprionodon terraenovae began in April and continued to increase through (Parsons, ’83), the blue shark, Prionace glauca the months of August–November with all stages (Pratt, ’79), the chain dogfish, Scyliorhinus retifer of sperm production present. Sperm production (Castro et al., ’88) the sandbar shark, Carchar- increased as androgen concentrations also began hinus plumbeus (Joung and Chen, ’95) and the to increase. The epididymis contained the larg- 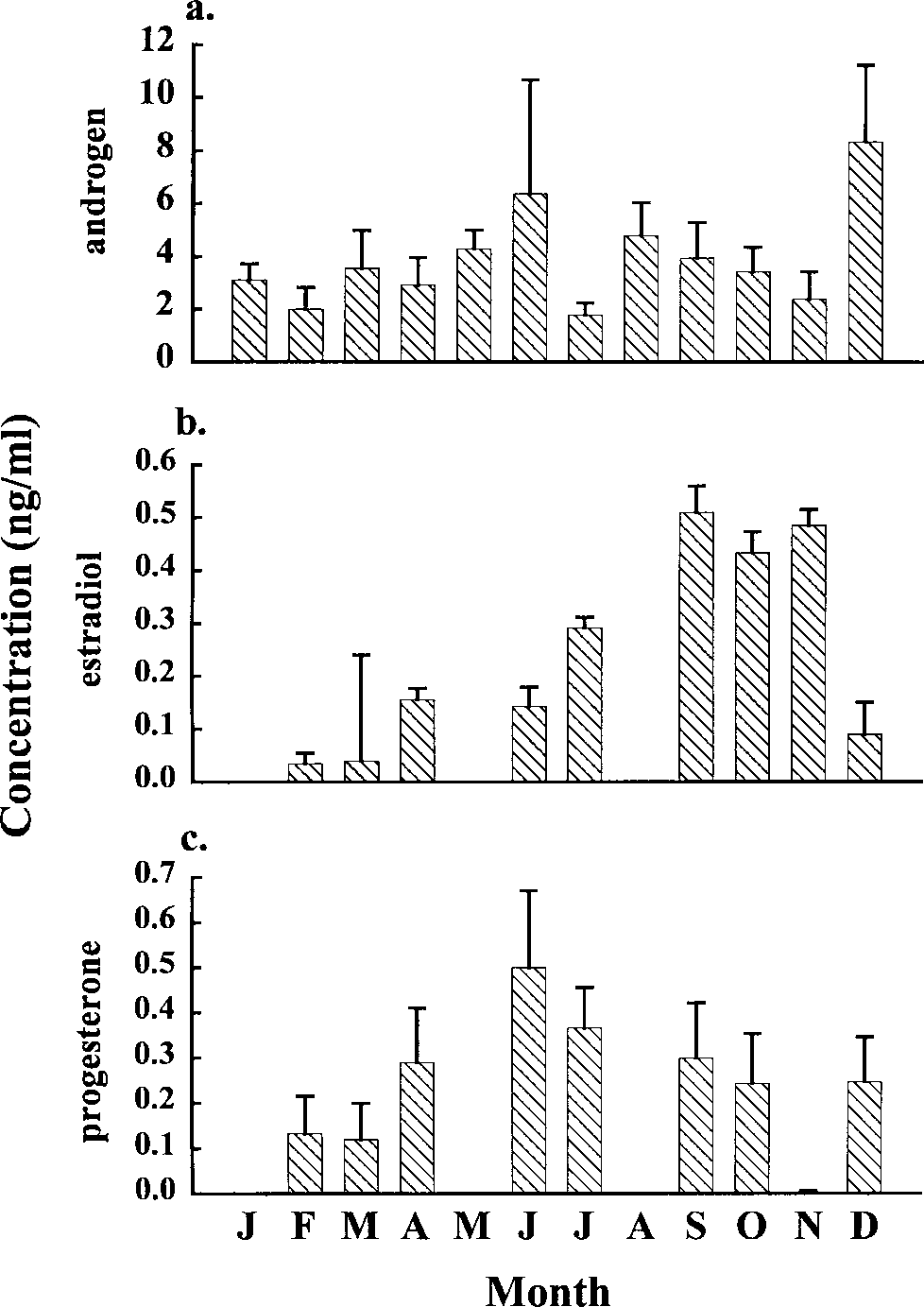