Atomic Lithium Beam Spectroscopy for N and T in Reactive Plasmas
Institut für Experimentalphysik II, Ruhr-Universität Bochum, D-44780 Bochum, Germany 1. Introduction
In a reactive plasma the species composition and the flows of particles to a substrate depend
upon the electron energy distribution and its spatial variation and time dependence. The
electron density has a large influence on the growth rate of thin films deposited from the
discharge gas. To control plasma assisted processes it is important to have a detailed
knowledge of these quantities during every phase of a process, preferably with high spatial
and time resolution. The emitted radiation of a thermal atomic lithium beam is used to obtain
the density of the electrons and their mean kinetic energy. Using an intensified CCD camera
in combination with interference filters the light emitted from neutral lithium atoms (excited
through collisions with plasma electrons) is detected. The plasma parameters are obtained
from appropriate line intensity ratios and will be compared with probe measurements in rare
gases. The characterization of the atomic lithium is done by LIF measurements with laser
diodes. Discharge geometry is an GEC reference cell with or inductive coupling at 13.56
MHz and at pressures from 0.1 to 50 Pa.
2. Experimental Setup
Using a CCD-camera, optionally in combination with a spectrographical system or with
interference filters for the observed lithium lines, the spectral line emission from a beam of
neutral lithium atoms after collisional excitation IC C D w ith filte rs
o r sp ectro m eter
is investigated perpendicularly to the beamdirection with spatial and temporal resolution.
The atomic beam is produced by a lithium ovenwhich consists in a Knudsen cell - filled with an G E C -C ell
alloy of copper and lithium (2% lithium) - and L a n gm u ir
an aperture system in order to collimate thebeam. By indirect resistive heating of theKnudsen cell up to 950°C one receives adynamic balance between diffusion from lithium atoms to the surface of the Cu-Li-alloy andevaporation of atoms controlled by vapourpressure in the cell. The advantage of this solidstate source in comparison to fluid sources andion beam sources is a simple construction, itshigh operating time, optional orientation ofmounting and its insensitiveness to unexpectedair leakage. The outlet velocity is in the range of Figure 1: Experimental Setup
103 ms-1 and the flux of lithium atoms out of theoven at about 1017-1018m-2s-1. The diagnostics is installed on a ICP GEC reference (5 turn pancake coil, L=1.2µH; lower electrode (on groundor defined potential): diameter: 10cm, distance between electrode and quartz plate: 4cm,pressure: 0.1-50Pa, T L eV, N L 1017m-3-1018m-3, f=13.56MHz). 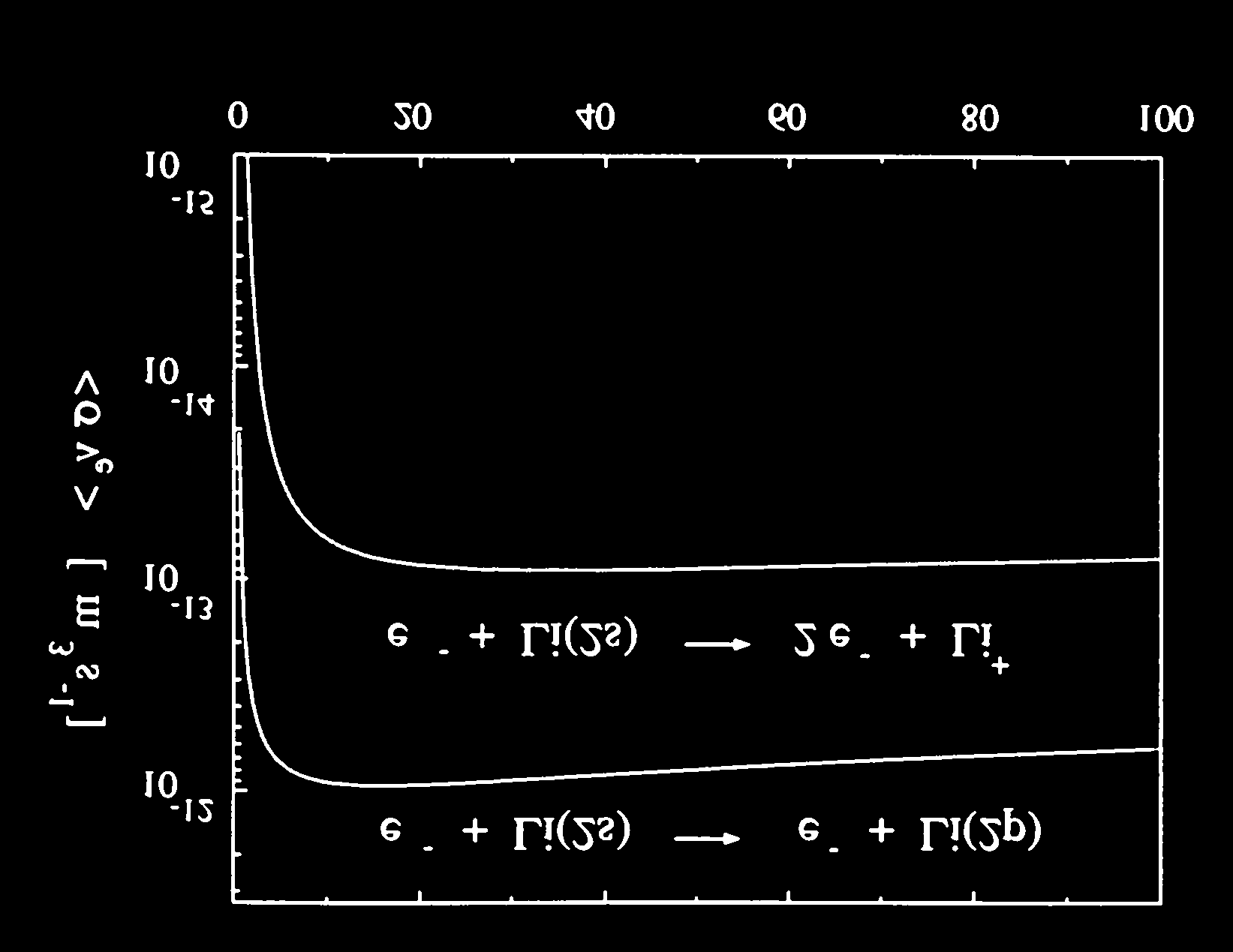 3. Atomic Lithium Beam supported Emission Spectroscopy
Atomic beam supported Li emission spectroscopy is
based on the measurement of line intensities and intensity ratios of electron excited states of the neutral Li- atom. These are in particular the 2S-2P transition at 670.8nm, the 2P-3S transition at 812.6nm, and the 2P- 4
3D transition at 610.4nm, see fig.2. Li-beam spectroscopy has already been used successfully for the 3
diagnostics of the edge region of fusion plasmas todetermine plasma density fluctuations [1]. In the case of reactive low pressure plasmas (e.g. ICP or CCP) severalfactors impede the application. One main obstacle comes from the fact that these low temperature plasmas are usually operated in the 0.1-10Pa range and have alow degree of ionization. Thus a large fraction of Figure 2: Term Scheme of Lithium
At low pressure (0.1Pa) one obtains a well definednarrow lithium beam (see fig. 3) because the mean free path of lithium atoms is in the rangeof 10 centimeters and it is possible to reach high spatial resolution in the measurement of theplasma parameters. The width of the lithium beam is obtained by laser induced fluorescence(LIF) at the 2S-2P transition (670.8nm) using a tunable diode laser in an external resonator(Littman setup).
Figure 3: LIF Intensities:
Figure 4: Crosssections for e—-Excitation
At higher pressure (a few 10Pa) the situation changes: The beam becomes broader anddegenerates to a lithium cloud due to collisions with the discharge gas. The discolouration ofthe discharge stays usable but the spatial resolution is limited and the modelling effortbecomes higher.
The other problem is due to the low electron temperature in the reactive plasmas. Whereas forfusion edge conditions with Te values above 10eV energy independent constant cross sectionsmay be used (see fig. 4), the threshold region with significant dependence on energy appliesfor reactive plasmas with Te of about 1eV. A collisional radiative model in consideration of allstates in Figure 2 is required.
4. Probe Measurements and α−γ−Hysteresis
To prove and to characterize the diagnostics is installed on plasmas in rare gases and
compared to probe measurements. The results of these probe measurements in the ICP GEC
cell are shown in the following figures. The central electron density (see fig 5) increases with
the discharge pressure. Increasing the power (fig. 6) leads the growth of the electron density
into a saturation area and the radial density profiles (see fig. 7) become flatter. The zone of
high electron density is enlarged.
Figure 5: Central Electron Density as a
Figure 6: Central Electron Density as
5 0s ccm A r
rad ial pr ofile
P=100W, Γ=30sccm Ar
pressure / Pa
Figure 7: Electron Density
Figure 8: α−γ−Ηysteresis
Figure 7 also shows flatter radial profiles at lower pressures. The α−γ−hysteresis of thedischarge one can see from figure 8: Increasing the power at a given pressure the dischargeswitches at the dotted curve from α- into γ-regime (transition from mainly capacitive tomainly inductive coupling). Decreasing the power the transition back into the α-mode takesplace when the power reaches the solid curve.
5. Résumé and Outlook
From the measured line intensities and line intensity ratios it is possible to obtain locally the
electron energy and density at low pressure. For that purpose a detailed collisional radiative
model is in preparation. At higher pressure the spatial resolution of the diagnostics is reduced
due to beam broadening and degeneration to a cloud of lithium atoms. In addition in this case
the density reduction of the neutral lithium atoms by collisional ionization has to be taken into
account.
In order to enlarge the efficiency of the diagnostics and to reach a sufficient beam collimationand penetration depth even at higher pressures the transition to pulsed and fast atomic beams(also with heavier atoms, e.g. potassium) provided by laser ablation [3] is in preparation. Alsoa comparison to Thomson scattering at the same discharge geometry is in preparation.
This work is supported by Deutsche Forschungsgemeinschaft within SFB 191 (B8).
6. References
A. Dinklage, T. Lokajczyk, H.J. Kunze, B. Schweer and I.E. Olivares; Rev. Sci.
Instrum., 69 (1), 321-322 (1998)
M. Böke, G. Himmel, B. Schweer and J. Winter "Atomic Lithium Beam Spectroscopyfor N and T in Reactive Plasmas" in: Lausanne Report LRP 629/99 "Workshop on Frontiers in Low Temperature Plasma Diagnostics III", Switzerland ( 1999) Y.T. Lie, A. Pospieszczyk and J.A. Tagle; Fusion Technology, 6, 447-452 (1984)

A new approach towards neuromodulation

A New Approach towards Neuromodulation 1. University of Western Ontario, London Health Sciences Centre 339 Windermere Road A10-026, London Health Sciences Centre 1. Introduction Many neurological disorders are determined by degeneration of specific groups of cells. Parkinson's disease (PD) is characterized by a loss of neurons from the substantia nigra which results in a deficiency of