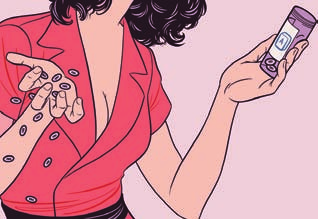 broke her leg, and had a hairline fracture in not harmed by the practice. Here are three her left eye socket. While the doctors were treating her, they noticed the blood level of less effective drug and steps you can take to ensure you get the medication to treat cist, she learned, had exchanged her Tegretol for a generic that worked a little differently. “Just imagine what could have happened had I been behind the wheel of a car,” she says.
mistake, but it wasn’t. Instead, she experi- enced a potentially deadly consequence of stroke while using a widely prescribed blood a common practice called “therapeutic sub- stitution,” wherein her pharmacist legally prescription for a new one, but a mail-order switched a drug prescribed by her doc—but pharmacy changed the prescription back to without telling her or her physician. Usually, the old drug. His son, Carmen, caught the substitution and called the pharmacy. “They with a generic formulation of the exact same told me that legally, they had to make the switch,” says Carmen. Yet no state mandates similar but with one crucial distinction: The therapeutic substitution, and even out-of- new drug is in the same class as the old and state mail-order houses must comply with treats the same condition, but it’s not pre- the laws in your state. In Illinois, therapeu- tic substitution is allowed only in hospitals, where doctors control the process. “The tins. They constitute a single class of medi- cation because they all lower cholesterol by ing the insurer’s list of covered drugs as the reducing its production in the liver. But not law,” Carmen says. He knew this because he is every statin lowers cholesterol by the same executive director of the National Association amount or with the same balance of LDL to of Boards of Pharmacy. “I told them I had a HDL. So if your doctor orders a brand-name copy of the Illinois Practice Regulations and drug but your pharmacist switches it for the knew the law entitled my father to the right cheaper version of a different medication drug,” he says. After transferring him from a (but still a statin), you may not get the pre- customer service rep to a real pharmacist, the cise beneﬁ t your doctor had in mind—and may, in fact, suffer unexpected side effects. In one way, at least, patients can beneﬁ t z If your doctor believes her drug of choice from substitution—smaller co-pays. But two-thirds of people who reported having her to write “medically necessary,” “may meds switched in a National Consumers League survey said they weren’t consulted. Of those, 40% said the new drug was not as effective, and a third said it had more side effects. “It’s not okay for your insurance com-pany or pharmacist to change your drugs without your knowledge,” says NCL Execu-tive Director Sally Greenberg.
is likely here to stay—meaning you need to be on the lookout to make sure you’re not substitute,” or “DAW”—for “dispense as written”—on the prescription. That obligates the pharmacist to check with you and your doctor before making any switches.
z SWITCHES
If a pharmacy tells you the law requires a substitution, ﬁ nd out which ones your state allows, and challenge the switch if the phar- macy has overstepped its authority. To get the information you need, contact your state’s board of pharmacy; go to nabp.net and click on the Boards of Pharmacy button to bring up IF YOUR DOCTOR PRESCRIBES
a contacts list for every state ofﬁ ce. Pick a pharmacy you like and stick with it. YOU MAY GET: Simvastatin, the generic
“That way, your pharmacy will have a long record of your prescription history and know THE DANGER: Lipitor does a better job
if a drug didn’t work for you,” says Carmen Catizone, whose father had stopped going to a neighbor hood drugstore when his insur- z Ask your pharmacist to put a blanket state- ment in your records that you don’t want any IF YOUR DOCTOR PRESCRIBES
medications switched unless you and your LEXAPRO an antidepressant
doctor approve. “It’s a way of getting your YOU MAY GET: Citalopram, a generic
pharmacist’s attention,” says Catizone. “When pharmacists know more, they can do a better THE DANGER: You could experience
Your Insurance Com- it’s prescribed in smaller amounts. IF YOUR DOCTOR PRESCRIBES
DIOVAN an angiotensin receptor
Insur ance pl an formul aries—the lists blocker for lowering blood pressure of drugs that insurers cover—are at the heart YOU MAY GET: Lisinopril, the generic
of most substitution battles. “The insurance company will tell me that the drug I pre- scribed for a patient is not approved or is at THE DANGER: Patients on lisinopril
the higher co-pay, so I need to submit docu- mentation justifying why insurance should cover it instead of making a substitution,” IF YOUR DOCTOR PRESCRIBES
says Lori Heim, MD, president-elect of the NEXIUM a proton pump inhibitor for
American Academy of Family Physicians. If a doctor persuades the insurance company YOU MAY GET: Omeprazole, the
that a particular drug is medically necessary, the insurer may cover it after all. But the hag- gling, follow-ups, and appeals can be time- THE DANGER: Your body may respond
consuming—and infuriating. One frustrated Ohio doctor sued Medco, a large pharmacy beneﬁ ts management company, asking to be 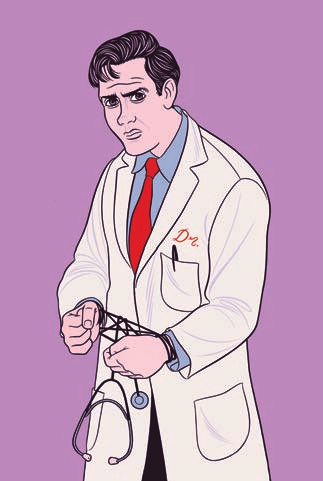 compensated for time wasted on prescrip-tion hassles—and won a small award. Court testimony in the case revealed that the company sent 57 times more prescription-related inquiries to physicians in 2007 than it did 10 years earlier.
Meanwhile, as doctors deal with an ocean of paperwork and bicker with insurers, patients suffer. “I’ve had patients who did not have control of their allergy symptoms—sneezing and feeling miserable—while I jumped through hoops showing that these other drugs didn’t work for them,” says Heim.
GET THE RIGHT DRUG:z Ask your doctor up front—before you ﬁ ll your prescription—which generics, if any, are acceptable subs for the drug that she wants you to take: A switch at the phar-macy may be perfectly ﬁ ne (and often cheaper for you). Write down the name of the prescribed medication and the approved subs on a piece of paper separate from the prescription slip, and then check the ﬁ lled order against your list. If your pharmacist makes an unapproved switch, call your doc- tor right away so she can begin document- ing why insurance should cover the original name drugs is higher,” says Reneker. “I’ve z If your doctor doesn’t ﬁ ght a substitution, had pharmacies tell me a drug isn’t on the make sure he isn’t just taking the path of least formulary when I’ve already checked with resistance or losing your prescription in the the insurance company and know that it is. shufﬂ e. “Busy doctors sign papers quickly, so The switch to a cheaper substitute is moti- it’s easy for a substitution to sneak through,” says Robert Reneker, MD, urgent care physi- cian at Spectrum Health, a hospital system in Grand Rapids, MI. Ask: Will the new drug have slashed prices on generics—a move work better? How will I know if it does or that lowers proﬁ t margins and reduces the doesn’t? Are side effects different from those temptation for pharmacists to make sneak associated with the original prescription? How will it interact with other medications and Target have led the way on price cuts, their discounts. “Drugs have become a way to attract people to stores so they’ll spend money on other items,” says Reneker. z Call your insurance provider to conﬁ rm whether a drug is really covered if your ethical behavior. “But they’re not always 2009 Rodale Inc. All Rights Reserved. Produced under license by The YGS Group. ® is a registered trademark of Rodale Inc.
For more information about ®, visit www.prevention.com #1-26297802 Managed by The YGS Group, 717.399.1900. For more information visit www.theYGSgroup.com/reprints.

Troop 53 Camping Activity Belleplain State Park Friday, April 23th to Sunday, April 25th Summary: We’re going fishin’! We’ll be camping at Belleplain State Park in New Jersey near Cape May, approximately a 2- hour drive from Kennett Square . We’ll leave on Friday for our campsite. On Saturday, we’ll all get up early, drive to Wildwood, and board a large fishing boat for