W
ater &
Atmospher
e 17(1) 2009
Water Quality
Nutrient trading to improve and
preserve water quality
Kit Rutherford and Tim Cox are modelling a
market where the currency is nitrogen exports and the commodity is clean water. Trading in a watery market
• Regions are setting limits (‘caps’) on how much here’s a lot in the news about emissions trading schemes. nutrient farmers are allowed to discharge into New For more than a decade the individual transferrable quota (ITQ) system has been used in New Zealand to help • ‘Cap-and-trade’ schemes let producers buy and manage marine fisheries. Current discussions are about trading schemes for carbon to help meet New Zealand’s obligations • The new N-Trader model simulates the market under the Kyoto Protocol, for water to help optimise irrigation, response to nitrogen emissions trading.
and, most recently, for nutrients to help minimise the impact of pastoral farming on water quality. How might nutrient trading schemes work, how will they improve sustainable Trading nutrient inputs to Lake Taupo
management, and what are their potential shortcomings? Recent decisions by the Environment Court have cleared the Scientists at NIWA are working with Motu Economic way for a cap-and-trade scheme to be implemented at Taupo. and Public Policy Research in nutrient trading projects for The target has been set to reduce the nitrogen load by 20%. Taupo and Rotorua, two places where regional government Farms occupy only 18% of the land but contribute more has decided to reduce nutrient inputs to the lakes in order than 90% of the manageable nitrogen input to the lake. The to maintain or improve water quality. Environment Waikato intention is to allow nutrient trading at Taupo. and Environment Bay of Plenty have targeted ‘manageable’ The ‘players’ in the Taupo market are farmers and the nutrient loads, which excludes natural sources. The proposed Lake Taupo Protection Trust, but not foresters or lake-side nutrient trading schemes at both sites are similar in concept communities. Community sewage will be controlled outside to the fisheries ITQ system, but they differ in detail. Both the market. Forestry companies are excluded from the market schemes are based on ‘cap and trade’ and rely on the widely because exports from forestry are similar to the natural and used Overseer® model to determine how much nitrogen is uncontrollable exports from native forest and scrub. The Trust leaving farms. As part of a collaborative study, NIWA scientists administers an $81.5 m fund to protect lake water quality, have created the computer model N-Trader to simulate the and will stand in the market to purchase nitrogen discharge The initial allowances are being allocated based on How does a ‘cap-and-trade’ scheme work?
documented stocking rates, meat and wool production, All cap-and-trade schemes follow these basic steps: fertiliser use, and other parameters, during a five-year window 1. Define the ‘cap’ – here the nutrient load that maintains and using Overseer® to predict nitrogen exports. When this process is completed, each farmer will have a consent which 2. Define the ‘players’ in the market.
details their NDA – a fixed amount expressed as tonnes of nitrogen 3. Allocate the ‘cap’ amongst players – these allocations From year to year, farmers can alter how they farm, provided 4. Trade ‘allowances’ – this involves having a market their nitrogen export (as predicted by Overseer®) does not exceed their NDA. If a farmer wants to increase production, they must purchase NDA from another farmer who wants to The similarities and differences between the two schemes at decrease production. Once a trade has been agreed between two farmers, each of their consents is adjusted to increase or decrease their NDA. Lake Taupo
Lake Rotorua
Between the farm and the lake, some nitrogen is stored or removed – on average about 50% – by processes including plant uptake, deposition, and denitrification; this loss is known as attenuation. Nitrogen that drains into the groundwater may take decades to reach the lake; this is called time lag. There was discussion about including attenuation and time lags in the allocation
regional plan for Taupo, but a simplified approach (endorsed Market place
by the Environment Court) focuses on farm exports rather Monitoring 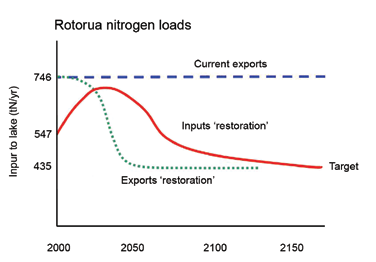 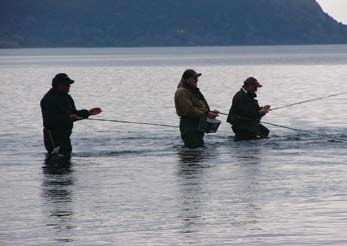 Vintage groundwater
To accommodate groundwater lag in nutrient trading schemes,
Trading nutrient inputs to Lake Rotorua
models can incorporate the water’s ‘vintage’. For example, in At Rotorua, a stakeholder working group has discussed a order to farm in 2000, Farmer A in a 50-year groundwater lag cap-and-trade scheme and research is underway to fine-tune zone would need to hold allowances of vintage 2050, whereas the scheme by investigating market efficiency, trading price, Farmer B in a 25-year lag zone would need to hold allowances of vintage 2025. Farmer A could reduce production in 2000 and sell monitoring and administration costs, and the impact on the his 2050 vintage allowances to Farmer B, who would hold them for use in 2025. If the cap decreases over time, then the total The target set by Environment Bay of Plenty is to reduce number of allowances would be higher for 2025 vintage than lake inputs to 435 tN/yr – the input during the early 1960s before there was widespread concern about algal blooms and deoxygenation. In 2005, total land exports were 746 tN/yr and lake inputs were 547 tN/yr; the 199 tN/yr difference arises from groundwater lags and attenuation. A substantial reduction in Modelling nutrient trading with N-Trader
exports is required to attain the lake input target, and this is The N-Trader model has a biophysical component that predicts likely to be phased in gradually over a number of years. nutrient exports from each farm using Overseer®, and then In Taupo groundwater lags were ignored and the cap was simulates attenuation and groundwater lags. N-Trader also has fixed, so allowances do not vary with time. Rotorua differs an econometric component that predicts the price at which from Taupo in that the cap will decrease over time and it is nitrogen is likely to be traded, and how price is likely to affect intended to include groundwater lags. A decreasing cap, land-use. This component is based on an existing Motu model and groundwater lags, can be accommodated by issuing which relates changes in land-use over the last 20 years to allowances with different ‘vintages’. The vintage specifies changes in commodity prices and interest rates. when the nitrogen reaches the lake (see box, above right). The In the first year of the study we developed and tested a market then trades different vintages, which is feasible but protoype N-Trader. Over the next two years we’ll use the complex, and has similarities to a futures market. model to investigate the effects of changing commodity prices, Research has been commissioned to inform the design of farming practice, nitrogen-mitigation measures, and the size of nutrient trading schemes in New Zealand using Rotorua as the cap on the behaviour of farmers, changes in land-use, and an example. The work is funded by FRST and Environment impacts on the local economy. It will also be used to investigate Bay of Plenty, and is spearheaded by Motu, a not-for-profit different options for nutrient trading schemes at Rotorua and organisation with a long history of providing policy advice to elsewhere in New Zealand. Our results will help identify the central and local government. NIWA’s new N-Trader model strengths and weaknesses of nutrient trading schemes. Some will be used to simulate a nutrient trading market. GNS Science advantages and disadvantages are already apparent, and this provides information on groundwater lags. project will explore these in more detail. W&A
Taupo’s world-class fishing is one of the amenities nutrient trading can This schematic representation of nutrient exports from the catchment and inputs to Lake Rotorua shows the effects of groundwater lag. The agreed restoration target for the lake is Dr Kit Rutherford and Dr Tim Cox are catchment model ers at NIWA The current export from the catchment is 746 tN/yr (dashed blue line) and the current lake input is 547 tN/yr. The trajectory N-Trader draws on expertise from Motu Economic and Public Policy of exports (dotted green line) and inputs (solid red line) towards Research and GNS Science. Funding comes from the Foundation for the target have not been agreed; those shown are for illustration Research, Science and Technology and Environment Bay of Plenty.

Study Skil s Tips and Recommendations for Parents Dear parents, the fol owing information given from http://www.education.com/reference/article/good-school-study-habit- parent-guide/ and adapted to our experiences, presents tips and recommendations for you to take into account when helping your kids to study at home. It is essential for us as teachers and you as parents to speak the same lan