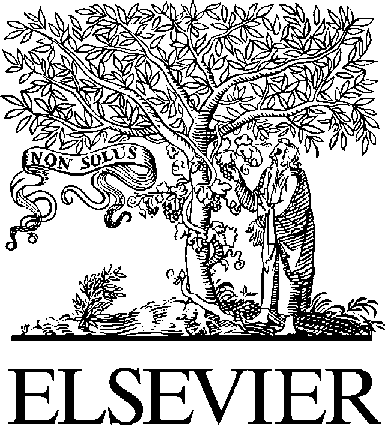 Chemical biology and bacteria: not simply a matter oflife or deathDeborah T and Eric J Rubin Chemical biological approaches to understanding bacteria small molecules as tools to systematically dissect the have largely been confined to screening for antibiotics. More pathways involved in these complex phenotypes, culmi- complex phenotypes, such as virulence, have largely been nating in the generation of a new name for an old studied using bacterial genetics. However, it has recently become clear that these two methods are complementary andthat combining chemical biologic and genetic approaches to The field of chemical genetics has predominantly fallen studying bacteria brings new power to old problems.
within the domain of eukaryotic biology, in part for historical reasons. Some of the earliest demonstrations 1 Department of Microbiology and Molecular Genetics, Harvard of the power of chemical genetics resulted in important contributions to eukaryotic biology, using both specific 2 Department of Immunology and Infectious Disease, Harvard natural products as well as small molecules identified in high-throughput chemical screens. Examples include one Division of Infectious Disease, Brigham and Women’s Hospital, USA of the earliest applications of chemical biology, using colchicine to identify tubulin as well as more recentexamples. These include natural products FK506, cyclos-porine and rapamycin, which have helped to elucidate Current Opinion in Chemical Biology 2006, 10:321–326 immune signaling pathways [], and monasterol [] and blebbistatin found in high-throughput screens, which have helped to elucidate steps in mitosis and cytokinesis Edited by Clifton E Barry III and Alex Matter By contrast, in prokaryotic systems, much of chemical biology has been relegated to the arena of antibioticdevelopment, a life or death phenotype.
1367-5931/$ – see front matter# 2006 Elsevier Ltd. All rights reserved.
Chemical genetics has also been particularly applicable in eukaryotic systems because, until recently, targetedgenetic methods have been largely lacking. In contrast,prokaryotic systems have a rich tradition of classical and molecular genetics with diverse phenotypes often easily The concept of chemical biology is old, dating back generated through manipulation at the genetic level.
billions of years. Nature has long exploited the ability Despite the power of classical bacterial genetics however, of small organic molecules to regulate cellular processes.
we would argue that chemical approaches can be extre- From steroids acting as hormones in eukaryotic systems mely valuable in the study of diverse and complex bac- to quorum sensing molecules in prokaryotic commu- terial processes. In fact, the potential for chemical genetic nities these small-molecule effectors enter the cell to complement classical genetics (and genomics) may and modulate gene and protein expression and function.
well make prokaryotic biology an optimal domain forsmall-molecule approaches ().
This same phenomenon has also been artificiallyexploited by modern medicine with the recognition that small molecules can be used to control cell phenotypes Chemical genetics generally refers to the use of small that impact human disease. With the first use of nitrogen molecules to conditionally perturb gene function, result- mustards as anti-neoplastic, alkylating agents in 1942 and ing in the generation of phenotypic changes In con- Alexander Fleming’s discovery of penicillin as an anti- trast to classical genetics where manipulation occurs at biotic in 1928 came the recognition that the phenotype of the DNA level, small molecules more typically modulate cell death can be conditionally generated by small mole- protein function by inducing conformational changes or competing for naturally occurring protein–ligand or pro-tein–protein interaction sites, resulting in altered activity As our understanding of cell biology in both eukaryotes ). Although previously the repertoire of small and prokaryotes has grown more sophisticated, we have molecules that were known to function in this manner was come to realize that a multitude of phenotypes exist that relatively small, the advent of high-throughput screening are far more subtle than simply alive or dead. The past of large chemical libraries has provided a new opportunity decade has seen a marked acceleration of interest in using Current Opinion in Chemical Biology 2006, 10:321–326 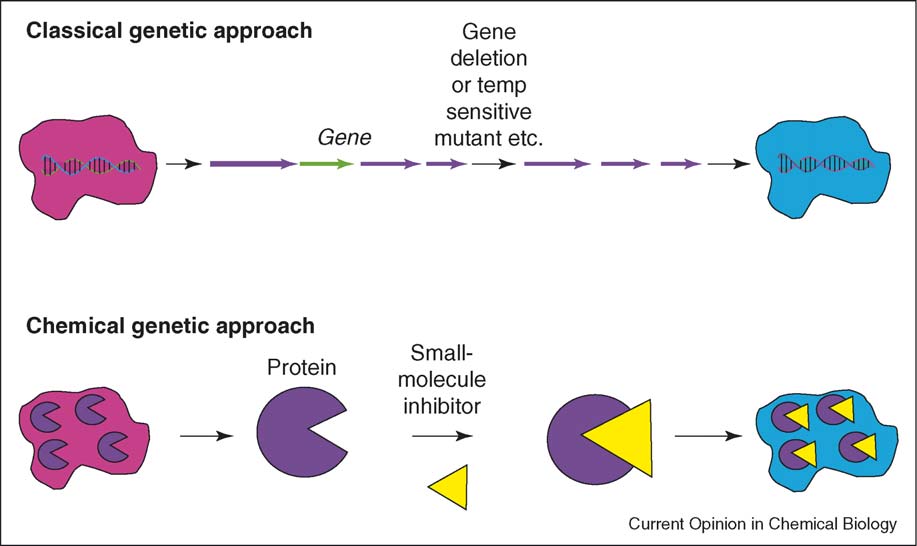 Comparison of classical and chemical genetics Slow (except for conditionally stable proteins) Useful for studying proteins essential for in vitro survival By analogy to classical genetics, both forward and reverse expensive and more robust, having been performed in genetic strategies may be employed in high-throughput diverse organisms including Yersinia, Vibrio cholerae, Sta- chemical screens to find small molecules of interest phylococcus aureus and Escherichia coli [].
(). In the reverse approach, small-moleculelibraries are screened against purified protein targets.
In addition, the marriage of chemical and classical genet- Interesting small-molecule candidates can then be used ics in many bacterial systems can facilitate understanding to study mechanistic aspects of the protein or potentially of the mechanism of action of the small molecule. An to generate phenotypes related to that particular protein example of this is the use of classical genetics to under- target if it is sufficiently cell-permeable and potent. In stand the mechanisms of new vancomycin analogues by this approach, there is relatively little distinction between generating resistant mutants ]. This example shows eukaryotic and prokaryotic systems [].
that generation of random or transposon mutants, orcomplementation with cosmid or expression libraries to In contrast, a forward approach screens for phenotypes of generate resistance to a given small molecule are easily interest. The challenge, then, is to identify the protein attainable goals with the help of conventional genetics.
targets of the small-molecule candidates as a means of The inherently smaller size of bacterial genomes relative identifying regulators of a given phenotype. It is in this to eukaryotic ones (specifically, mammalian genomes) type of approach that the opportunities in eukaryotic and also allows straightforward systematic approaches to iden- tifying and understanding cellular targets of small mole-cules (For example, arrayed libraries of bacteria that knock-out knock down ] or overexpress There are several reasons why bacteria are well suited for every opening reading frame (ORF) can be used to assay chemical genetic approaches. The design of phenotypic compounds and quickly determine their effects. In eukar- screens in bacteria is typically easier and the assays less yotes, however, such systems are far more difficult to use Genetic approach to obtaining conditional phenotypes.
Current Opinion in Chemical Biology 2006, 10:321–326 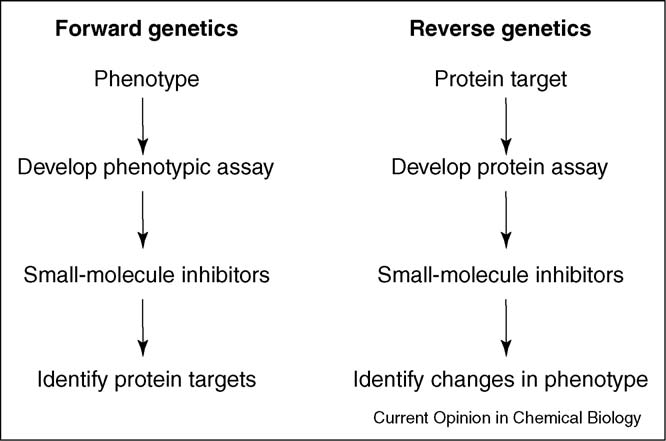