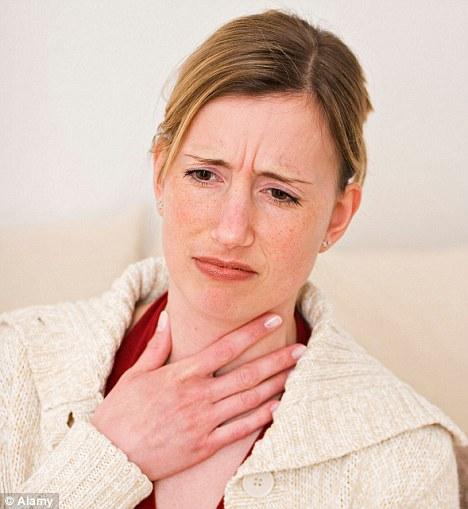 I am getting really bad mucus at the back of my throat which seems worse when I sit or lie down. What is causing this? Can you give me some advice? The explanation: An abundance of mucus in the back of the throat can be due to chronic rhinitis or acid reflux This is a common problem, and often a symptom that persists for years because patients have difficulty in obtaining a diagnosis, let alone a cure. Sometimes I fear this is because they seem to be otherwise healthy and so the symptom is not investigated further by the doctor. The patient gets used to it, yet they are driving those around them crazy with the constant throat clearing. There are two possible causes for the problem you describe: chronic rhinitis or acid reflux. The first is a problem with the nose and sinuses causing excessive mucus production. The upper respiratory tract - which connects the nose, sinuses and throat - is lined with a wet membrane covered in cells that secrete mucus. This helps to moisturise and warm the air as it passes through the tract and also, importantly, traps any harmful infections that are inhaled. But if this membrane becomes inflamed - as a result of viruses, bacteria or allergies - it produces much more mucus, causing a runny or stuffed up nose, or a nasal 'drip'. Around 90 per cent of chronic rhinitis cases are caused by allergies - often the only symptom is the constant build-up of mucus, or catarrh, in the throat. Chronic rhinitis means the allergy is to something in the air all year long (for instance, house dust mites) and not to something seasonal (such as pollen). Most cases improve after a few weeks of treatment with a strong anti-allergy medication: a twice-daily nasal spray of the anti- histamine azelastine, the steroid fluticasone or both. If these fail, it may be that the rhinitis is non-allergic - a response to irritants in the air or variations in temperature, which is much harder to identify or cure. However, I suspect what you have is not allergic rhinitis, but acid reflux, where acid passes upwards from the stomach into the gullet. This is most commonly associated with heartburn or, at times, severe chest pain as the oesophageal muscle spasms. However, what is less well known is that it can be relatively silent, causing mucus in the throat, a cough, hoarseness and possibly nasal discharge. These are triggered by stomach acid making the throat swell - mucus can then stick to the swollen tissues. Proving acid reflux is the cause of your symptoms may be tricky, as it may come and go or occur only when you are asleep at night and lying flat. But for those with significant and persistent symptoms, many doctors will suggest a trial of four to eight weeks of a proton pump inhibitor. These drugs almost switch off stomach acid production - surprisingly, this does not affect the way food is digested. To test the diagnosis, high doses of the drug are needed twice daily. If the symptoms improve, after a few weeks the dose is lowered. Treatment will have to be continued long term - a year or two - and may have to be re-started if the mucus and consequent throat clearing recurs. Finally, do note we all normally have some mucus in the throat draining from the sinuses - this gets rid of the tiny particles of rubbish from the air we breathe. On occasions people become over-sensitive - basically, too aware - of having to swallow it, which is known as irritable throat syndrome. This will respond to relaxation therapy from a speech therapist or physio.

Shareholders: At the end of the period of 2006, consolidated several years of good results for the Colombian Entity of veterinary Products VECOL S.A , In my capacity as President and under the guidance of Board, I am pleased to present the report of the financial year from January 1st and 31 December of the year mentioned. In the period ended, the Company achieved a sales volume of $ 41.026 milli