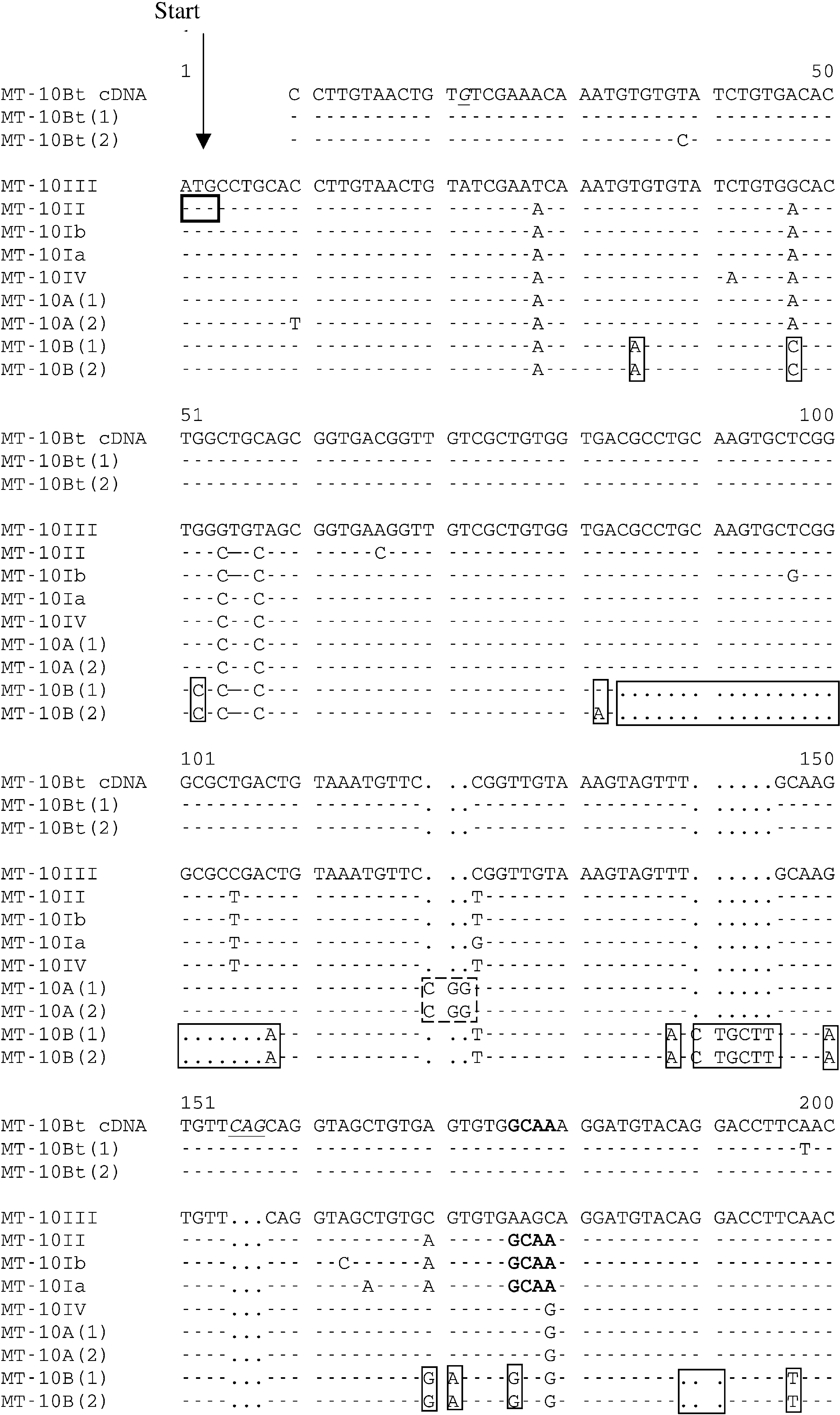 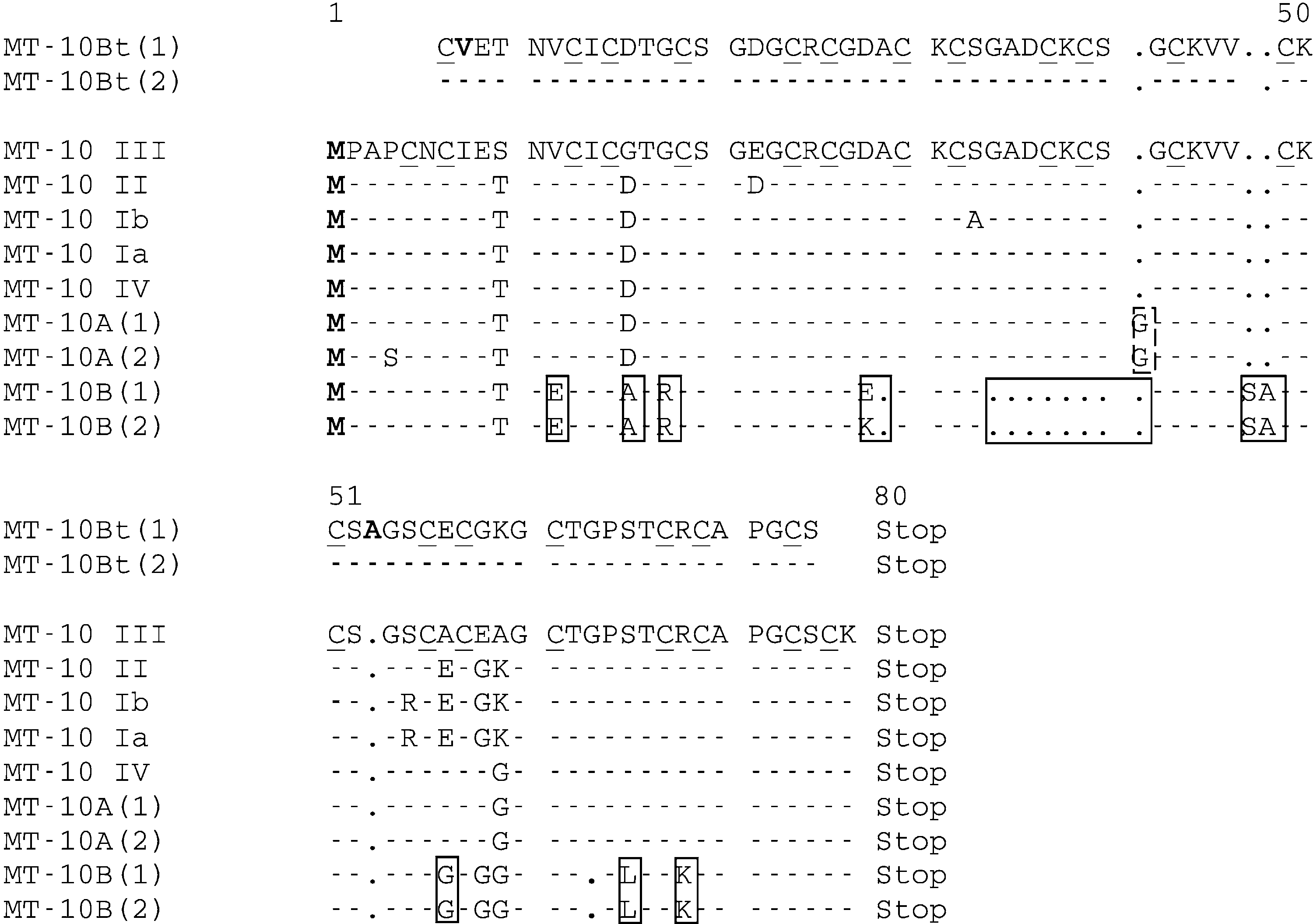 V. LEIGNEL ET AL.: SMALL METALLOTHIONEIN GENES IN MUSSELS Fig. 2. Multiple alignments of a protein sequence obtained in silico (bioinformatic approach) from the MT-10 nucleicsequence (showed in the Figure 1) obtained from Mytitus edulis and Bathymodiolus thermophilus. The GenBankaccession numbers of the cDNA sequences are as follows: MT-10III (AJ005454), MT-10II (AJ005453), MT-10Ib (AJ005452),MT-10Ia (AJ005451), and MT-10IV (AJ007506). The cysteine residues characteristic of metallothioneins are underlined.
Dots indicate deletions. The specific mutation sites for MT-10A and MT-10B are enclosed by dashed and solid boxes,respectively. The specific sites for the MT-10Bt(1) and MT-10Bt(2) sequences in Bathymodiolus thermophilus are indi-cated in bold face letters.
ure 3). These trees presented 2 groups with robust Patchun et al., 2004). We tried to determine whether branches: the first consisted of the MT-10 sequences, the cosmopolitan coastal family Mytilidae (bivalves and the second of the MT-20 sequences. Within the commonly chosen as sentinel organisms for detec- MT-10 group, the Bathymodiolus MT-10Bt se- tion of metal pollution) has others MT-10 genes that quences were similar to the MT-10 cDNA of B.
can be rapidly transcribed when the mussels are thermophilus and similar to the MT-10I and MT- exposed to various metals. We confirmed the exis- 10II isoforms of M. edulis. The small MT-10A se- tence of intron-free MT-10 genes in Mytilus edulis quences were similar to MT-10IV and MT-10III, and Bathymodiolus thermophilus. In Mytilus edulis whereas the MT-10B isoform was quite distinct.
we identified 2 distinct MT-10 genes (MT-10A andMT-10B, respectively, with putative alleles), char-acterized by an ORF and any intron sequence. Our investigations in Bathymodiolus thermophilus (a Are the Small MT-10 Genes Processed Pseudogenes hydrothermal mussel) also revealed a distinctive or Putative Active Genes? The few MT genes that MT-10 gene possessing an ORF and no intron. The have been isolated from bivalves all contain 3 exons MT-10Bt gene (2 putative alleles isolated) is very and 2 introns (Crassostrea gigas, Tanguy et al, 2001; similar to the mRNA MT-10 of B. thermophilus.
Mytilus galloprovmcialis, Ceratto et al., 2002; Perna We suggest 2 hypotheses that could account for viridis, Khoo and Patel, 1999), and this structure is the existence of these distinctive intron-free MT typical of the MTs found in other organisms such as genes: they could be active gene; or they could be birds, fish, mammals, and rice (Fernando and An- recent pseudogenes, resulting from reverse tran- drews, 1989; Hung et al., 1991; Wenming et al., 1998; Guo et al., 2003). The expression studies demon- On the one hand, the small MT genes found in strated of high induction metallothionein genes of M. edulis (MT-10A) and B. thermophilus (MT-10Bt) following metal exposure (Cousins, 1979; Cherian display a high degree of similarity to the MT-10 and Nordberg, 1983; Karin and Richards, 1984; cDNA sequences. Thus these small MT-10 genes Lemoine et al., 2000; Tanguy and Moraga, 2001; possess an ORF, and their cysteines, which confer 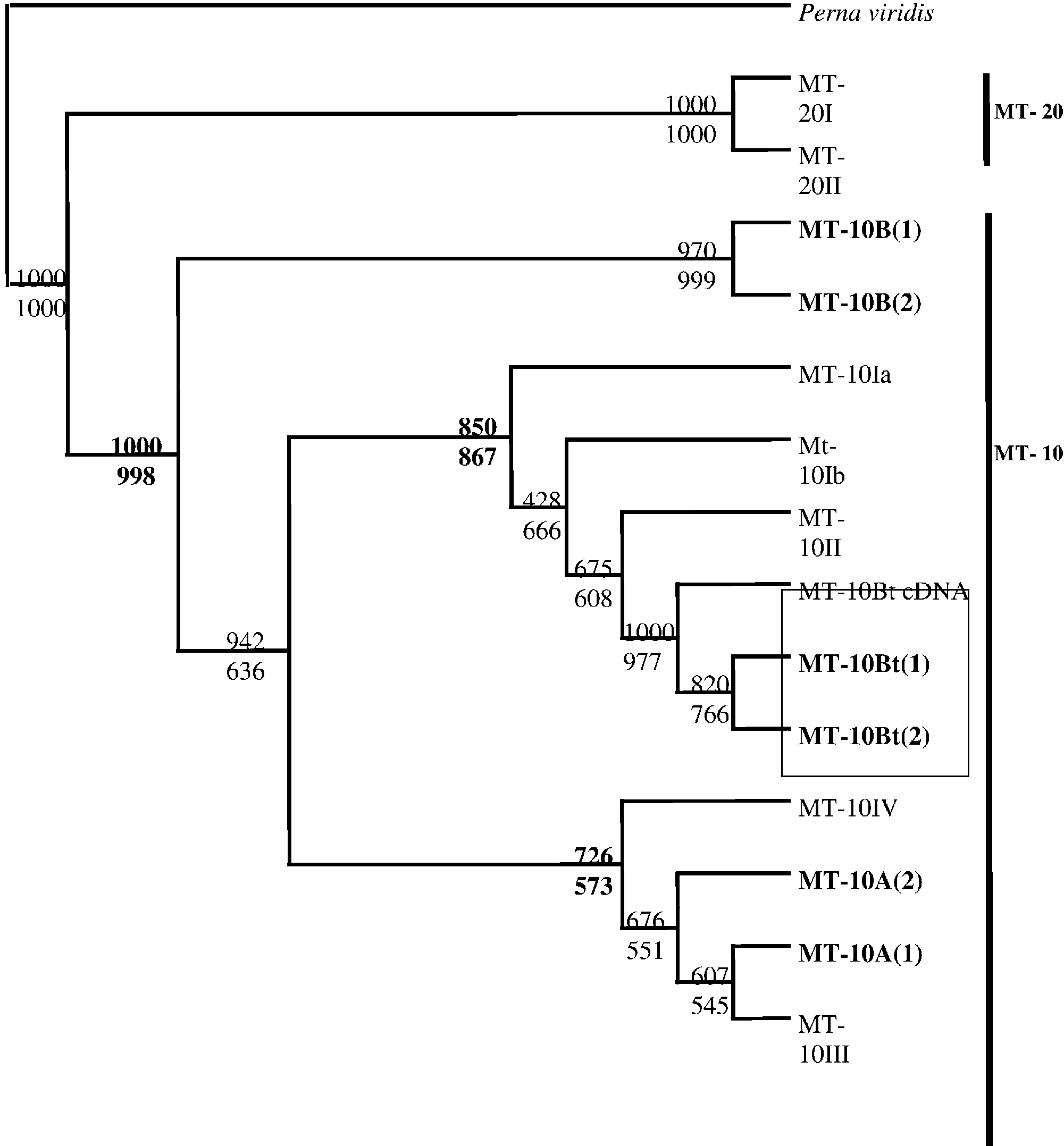 p: 02 94360306 e: [email protected] w: www.pennysnaturalhealth.biz Massage and herbal medicine news Father's Day This year Father’ Day is Sunday 5 September. This is a day for Dads’ to be celebrated for their contribution to family. I have gift cards which can be used for massage to help the males in your life to relax or to help them with a specific pro