tested positive at 6 months. The other 5 were HIV negative at birth, missed the 6- to 8-week and 3-month visits, but returned for the 6-month visit and were found to still be HIV RNA negative. Birth driedblood spots were also tested for infants who died or were lost to follow-up between birth and the 6- to 8-week visit; these infants were considered infected if they were HIV positive at birth. Counseling regardingthe HIV status of their infants was provided to mothers as soon as test results were available.
The safety of the intervention was monitored via venous blood samples obtained from all infants at birthand 6 weeks for complete blood cell count measurement using the analyzer. Alanine aminotransferase wasmeasured on specimens collected at birth and 6 weeks in infants at the start of the trial17 (ASCA AGIIChemistry System, Landmark Scientific Inc, Greensboro, NC). Of the NVP plus ZDV and NVP-only groupsof infants, 37 and 43, respectively, were tested for alanine aminotransferase at baseline, and 80 and 84,respectively, were tested at 6 weeks.17 The number tested at birth is smaller than at 6 weeks because ofdifficulties in obtaining unhemolyzed heelprick samples. Infants from another study13 involving NVP werealso tested.17 At time of testing, data from the HIVNET 012 study1 in Uganda indicated no major safetyconcerns with use of the single-dose NVP regimen but no such toxicity data were available from Malawi;therefore, a limited assessment was performed. More infants would have been tested had the data beensuggestive of toxicity.
Assessment of Adverse Events
A clinical history form was used to record adverse events, including level of severity (mild, moderate,severe, or life-threatening) and relatedness to the intervention. Adverse event interpretation was based onthe National Institutes of Health Division of AIDS Toxicity Table.18 Regardless of relatedness, infant deathswere separately reported. Two independent pediatricians (members of the data and safety monitoringboard of this study) assessed on a regular basis all reported infant deaths to ascertain the most likelycauses. Laboratory monitoring of adverse events was based on complete blood cell count on all infantsand alanine aminotransferase measurements on a sample of these infants. Adverse event summaries werepresented to the data and safety monitoring board at the time of interim analyses.
Statistical Analyses
Data were double entered for cross-verification, managed on site, and rechecked at the Johns HopkinsUniversity. An as-randomized analysis, subject to available data, was followed. Comparisons of treatmentgroups were performed for binary characteristics using proportions and exact tests; continuouscharacteristics were compared using means and t tests. The P values were all 2-sided. We calculated theproportion of infants infected at birth and the proportion of those infected at 6 to 8 weeks among thoseinfants not infected at birth and retested at 6 to 8 weeks. The primary outcome was overall HIV infectionat 6 to 8 weeks calculated by the life table approach19 as {1 – [(1 – proportion of infants infected atbirth) x (1 – proportion of those infants not infected at birth who became infected at 6 to 8 weeks)]}. TheGreenwood approach to estimation of variance of the survival function20-21 was used to calculateconfidence intervals for the survival estimate, and make statistical comparisons of survival estimates.
Logistic regression was used to adjust the comparisons of HIV infection at 6 to 8 weeks for maternal HIVviral load and other factors possibly related to HIV infection. Treatment groups were compared regardingsecondary censored binary outcomes such as mortality using Kaplan-Meier curves. Maternal viral load waslog10 transformed for a more symmetrical distribution having no outliers. Maternal viral load was alsoevaluated as a categorical variable by dividing it into approximate tertiles (<10 000 copies/mL, 10 000-99 999 copies/mL, and 100 000 copies/mL). In the final analysis, a cutoff of less than 100 000 copies/mLvs at least 100 000 copies/mL was used because transmission frequency was similar in lower viral loadcategories. A sample size of 890 infants (445 per group) was originally planned to have more than 80%power (even with 10% dropout) to detect a reduction of 6- to 8-week mother-to-child transmission (ininfants tested at 6 to 8 weeks) from 14% in the group without ZDV to 7% in the group with ZDV using anO'Brien-Fleming spending function with = .05 and 2 interim analyses. SAS statistical software version8.2 (SAS Institute Inc, Cary, NC) was used for all statistical analyses. P .05 was considered statisticallysignificant.
Approvals and Monitoring 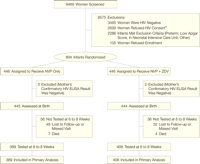 This study was approved by institutional review boards in Malawi (the University of Malawi College ofMedicine Research and Ethics Committee) and in the United States (the Johns Hopkins Bloomberg Schoolof Public Health Committee on Human Research). All women gave written informed consent for HIVtesting and enrollment. This study underwent monitoring by a 5-member data and safety monitoring boardwith expertise in clinical trials, clinical practice in Malawi, and statistics. Two independent scientists (aninternist and an internist/pharmacologist) from the University of Malawi with expertise in clinical practiceand clinical trials performed a 10-day monitoring of all study sites, including the clinics, laboratory, anddata entry site, as well as review of the study conduct and procedures in the first 6 months of the study.
Jump to Section
Overall, from April 1, 2000, to March 15, 2003, 9469 early presenting women were screened and 8575 women were excluded, of whom about 41% were HIV negative, 31% declined to speak with the counselor regarding counseling about HIV and the study, and 28% did not fulfill inclusion criteria (Figure 1). Thus, 894 women were enrolled and their infants randomized; 446 were randomized to NVP plus ZDV and 448 were randomized to NVP alone. Because the initial HIV test was a rapid test, 5women were excluded after the ELISA test was found negative (2 in the NVP plusZDV group and 3 in the NVP-only group). The excluded women were counseled again and followed up withtheir infants throughout the study. The baseline characteristics by study group were comparable (Table 1),with the exception of mode of delivery; more cesarean deliveries (mostly nonelective) were performed inwomen with infants in the NVP-only group (for the NVP plus ZDV group, 1 [0.24%] of 423 deliveries wereelective and for the NVP-only group, 1 [0.24%] of 421 deliveries were elective). There were no significantdifferences between the 2 groups in viral load and almost all infants were still breastfed by 1 week and 6to 8 weeks (Table 1).
Figure. Study Flow of Participating Women and Infants
HIV indicates human immunodeficiency virus; NVP, nevirapine;ZDV, zidovudine; ELISA, enzyme-linked immunosorbent assay. *These women declined to speak with the counselor regardingcounseling about HIV and the study.
View larger version (70K):
View this table:
Table 1. Comparison of Baseline Characteristics*
From maternal dosing with NVP to delivery, the median length of time was 4.2 hours (interquartile range[IQR], 2.3-8.5) in mothers of infants who received NVP and 3.9 hours (IQR, 2.5-8.0) in mothers of infantswho received NVP plus ZDV (Wilcoxon rank test, P = .54). There were no statistically significantdifferences between the 2 study groups when maternal NVP dosing time was dichotomized to less than 2hours and 2 hours or more (Table 1). Median times from birth to administration of NVP to the infant were9.5 hours (IQR, 4.9-16.0) and 9.3 hours (IQR, 4.7-15.4), respectively (Wilcoxon rank test, P = .47), forthe groups that received NVP only and received NVP plus ZDV. Based on the maternal histories taken,more than 90% of the infants randomized to ZDV received the complete ZDV regimen (14 doses).
Transmission was comparable at birth (ie, before the infants were differentially treated, with some

Level 10, 155 George St, Sydney NSW 2000 Australia Medication Competency This Medication competency paper has been designed to assess Registered Nurses and Endorsed Enrolled Nurses on their competency in relation to the calculation and the safe administration of medications. Every institution will have its own policies and guidelines in place for the safe administration of medications;