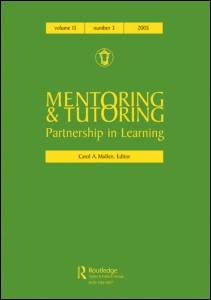 This article was downloaded by:[Kafai, Yasmin B.]On: 17 July 2008Access Details: [subscription number 792538852]Publisher: RoutledgeInforma Ltd Registered in England and Wales Registered Number: 1072954Registered office: Mortimer House, 37-41 Mortimer Street, London W1T 3JH, UK Mentoring & Tutoring: Partnership inLearning Publication details, including instructions for authors and subscription information:Mentoring partnerships in a community technologycentre: A constructionist approach for fosteringequitable service learningYasmin B. Kafai a; Shiv Desai a; Kylie A. Peppler a; Grace M. Chiu a; Jesse Moya a Graduate School of Education & Information Studies, UCLA, California, USA To cite this Article: Kafai, Yasmin B., Desai, Shiv, Peppler, Kylie A., Chiu, GraceM. and Moya, Jesse (2008) 'Mentoring partnerships in a community technology centre: A constructionist approach for fostering equitable service learning', Mentoring & Tutoring: Partnership inLearning, 16:2, 191 — 205 To link to this article: DOI: 10.1080/13611260801916614URL: This article maybe used for research, teaching and private study purposes. Any substantial or systematic reproduction,re-distribution, re-selling, loan or sub-licensing, systematic supply or distribution in any form to anyone is expresslyforbidden.
The publisher does not give any warranty express or implied or make any representation that the contents will becomplete or accurate or up to date. The accuracy of any instructions, formulae and drug doses should beindependently verified with primary sources. The publisher shall not be liable for any loss, actions, claims, proceedings,demand or costs or damages whatsoever or howsoever caused arising directly or indirectly in connection with orarising out of the use of this material. 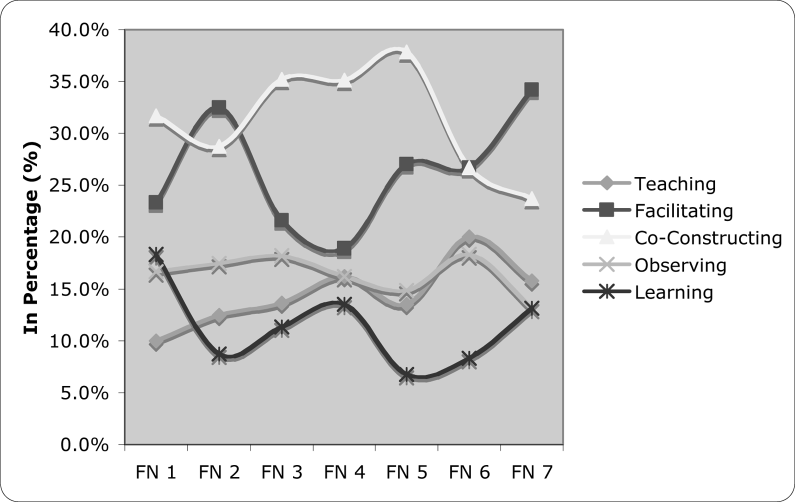 Mentoring & Tutoring: Partnership in Learning switched head graphics. We learned from looking at Amanda’s animation grid that in order to switchgraphics…[Coded as: Learner Role].
Our analysis of undergraduate mentoring profiles found some variation in both distributionand number of reported mentoring interactions. The average frequency of sustained mentoringwas 14 interactions over the course of their visits, with a minimum of five and a maximum of24 reported interactions. These differences might be due to the fact that some students spend moretime describing a few interactions in more detail while others had numerous mentoring interac-tions but which did not all qualify as sustained interactions. Some students also had a slow startwith their mentoring, interacting less with members during their first few visits. The mentoringprofiles revealed that 16 of the 36 mentors covered the full range of mentoring interactions in thecourse of their internship while others reported a shorter range, from teaching to co-constructingor observing to learning.
Mentor roles also varied over time, as indicated by the distribution in Figure 1. While all mentoring roles were present at all time points, we see considerable fluctuations over the courseof the weeks: co-construction and facilitation seem to change places at the beginning and at theend of the field internship. While we would not expect an even distribution of all roles at all times,it is unclear what provoked these variations. It is possible that mentors took on being facilitatorsmore at the end once they became more familiar with the software.
Figure 1.
Nearly one half of all mentoring interactions (48%) were initiated by mentors compared to one third by mentees (32%); co-ordinators, other mentors, or an unknown person initiated 20% Downloaded By: [Kafai, Yasmin B.] At: 15:56 17 July 2008 of all sustained mentoring interactions. This finding confirms the central role that mentors playin the life of the CTC in engaging and sustaining activities. But these numbers also point out thatmentees sought out these contacts, and thus indicated an active stance towards requesting assis-tance or suggestions by others. Figure 2 breaks down the types of interactions that took placebetween mentors and mentees. As indicated in the graph, the range of mentor interactions was 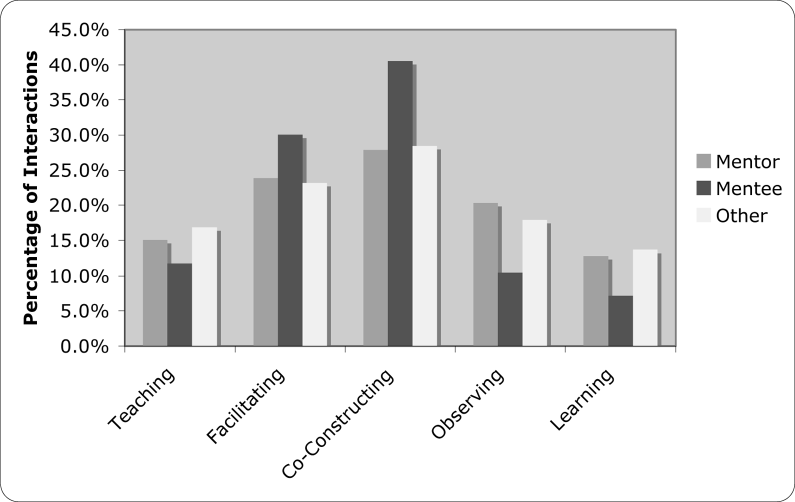 Downloaded By: [Kafai, Yasmin B.] At: 15:56 17 July 2008 Percentage of sustained mentoring interactions by role.
primarily between facilitator (25%), co-construction (30%) and observer roles (20%). For thementees, they mainly participated in co-construction (40%) and facilitator (30%) roles. This datareveals that mentoring at the CTC was chiefly a co-constructed affair where both mentors andmentees collaborated to create projects. Moreover, this co-constructed mentoring activity leadsto a more equitable relationship where both participants learn from each other.
Figure 2.
Percentage of sustained mentoring interactions by role.
When we examined the context of sustained mentoring, design activities took the lead with 43%, followed by games (30%), socialising (17%), and then web surfing and homework with 5%each (see Figure 3).
Figure 3.
Distribution of mentoring role by activity.
It should come as no surprise that design activities were most popular with co-constructive mentoring. In design activities, mentees often invited mentors to join them in an effort to createa program, graphic design or song and solicit their opinions as well as those of others. The follow-ing example illustrates how design activities can provide a context for a more equitable relation-ship between mentor and mentee: After we made the character’s body move, I asked Jacob if he wanted to change any parts of the char-acter. ‘Yes and I want the background to be a jungle.’. … We asked [another mentor] what to do afterthis. She showed us how to save the picture on the server and in the Scratch folder. She labelled it‘nature Jacob’. We went back to the Scratch program and chose the background sprite.… We decidedthat we wanted the sleigh to fly. We used the glide control and the sleigh and reindeer glided, but thenintersected at the top. We kept trying to figure out how to not make it do that. [The other mentor]came by and suggested that we change our x and y positions. [Coded as: Co-constructor Role].
But also other contexts, such as games, could invite a collaborative interaction between Mentorand mentee: One student who had never logged into Whyville – Laurent – asked for my help. I told him I too hadnever logged in and thought we could figure it out together… I found it helpful to really learn thein’s and out’s [sic] of Whyville with Laurent since we both did not know how to use it. [Coded as:Co-constructor Role]. 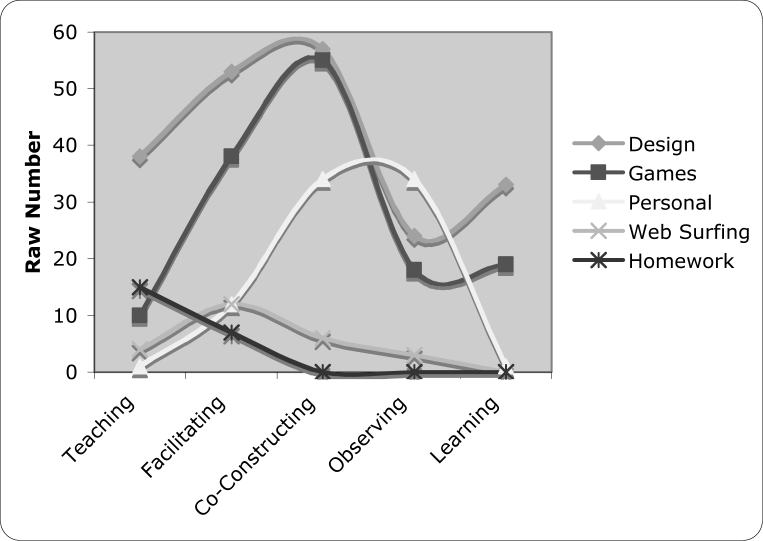 THYROID ASSESSMENT Hair tissue mineral analysis offers excellent information about thyroid activity and often very different information than blood tests. The hair assessment can be extremely helpful, especially in a common syndrome that one might call secondary hyperthyroidism. Most confusion arises because blood thyroid tests do not reveal much about thyroid physiology. Standard tests only