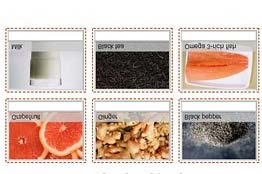 When Food and Pills ClashFresh Concerns on How Diet and Medicines Interact, From Pepper to Pomegranate Americans increasingly view the food they eat as medicine to help lower cholesterol, reduce high blood pressureand control blood sugar. But as with prescribed drugs, the health-improving qualities of foods such as olive oil,nuts and fruit can interact with other medications, causing possible problems.
Pharmacists often warn people not to mix anti-cholesterol drugs known as statins with grapefruit juice. Newerresearch suggests that other fruit juices, including cranberry and pomegranate, as well as olive oil may alsointerfere with how statins work in the body. Other laboratory studies show that certain popular teas can block theeffect of some medications, including the flu drug Tamiflu. And switching to a low-fat diet, itself a healthy lifestylechange, could reduce the potency of some medications.
Wrong Combination?
Diet can interact with medicine in two main ways. Some foodsblock the body's ability to absorb certain medications, effectivelyreducing the dose a person receives. Other foods enhance theabsorption of some drugs, which can lead to a possible overdose.
In general, diet will only interact with medications when a personis consuming exceptionally large portions of certain foods,pharmacology and medical experts say. A few teaspoons of olive oilon pasta typically doesn't pose any problems, for instance.
Still, as Americans increasingly select foods based on their health benefits, or take supplements with high doses of nutrients, thelikelihood of adverse interactions with medications rises. U.S. sales Match up drugs with the foods that research of supplements, natural and organic foods and functional foods, or has shown could potentially cause aninteraction with the drugs.
foods enhanced beyond normal use like calcium-fortified orange juice, grew to $93.5 billion in 2008 from $47.9 billion in 2000, according to Nutrition Business Journal, a nutrition-industry tradepublication.
"For every drug there is, there are unintended side effects. Youshould expect the same thing when taking nutrients at drug levels,"says Patrick Stover, director of the division of nutritional sciencesat Cornell University in Ithaca, N.Y.
Other factors also can affect how medicines are absorbed in thebody, including a person's age, weight and gender. Such variations,combined with possible interactions with the food we eat, canincrease or reduce the effective dose of a medication by as much as5- to 10-fold, which are "huge effects," Dr. Stover says.
Grapefruit is one of the most extensively studied foods for its impact on medication. Compounds in the fruit canincrease the potency of statins and other medications to potentially dangerous levels by inhibiting cytochromeP450, a family of enzymes that break down the drug. Research indicates that drinking just one eight-ounce cup ofgrapefruit juice a day increases the strength of the drug. 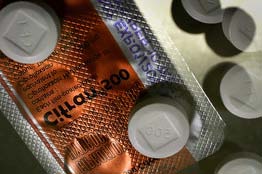 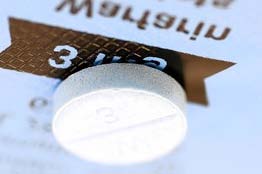 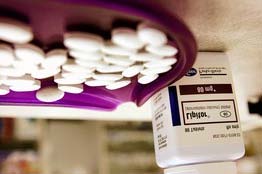 Recently, animal and laboratory studies have suggested that other fruits, including pomegranates, oranges(especially those from Seville), cranberries, grapes and black mulberries, could have a similar, although less robust,effect on statins in the body. Pomegranates and cranberries are frequently touted as healthy foods because of theirhigh quantities of antioxidants, which supposedly remove free radicals from the body and slow the onset of diseaseand aging.
In the lab, some scientists' work raises similar concern about oliveoil and some statins. The oil, a principal part of the Mediterraneandiet and believed to lower the risk of heart disease, also appears tocontain compounds that inhibit the drug's breakdown, accordingto researchers in Spain. The effects of olive oil likely aren't asstrong as that of grapefruit, but more studies are needed to figureout what quantities might actually impact humans, say experts.
John Thor Arnason, a biologist at the University of Ottawa, and his colleague Brian Foster of Health Canada, a government ministry, have investigated the effect on drugs of more than 450food products, mainly in animal and laboratory studies.
The scientists continue to study potential food-drug interactions,as do other researchers world-wide.
In one recent study, Dr. Arnason's team examined dozens ofdifferent kinds of beers. They found that the "hoppier" or morebitter beers reduced the effect of the cancer drug Tamoxifen, whencompared with beers that were less hopped. The study waspublished this year in the Journal of Agricultural and Food Another popular compound, the anti-oxidant resveratrol found inred wine, nuts and dark chocolate, is touted for its anti-agingbenefits. But resveratrol in large quantities appears to potentiallyenhance the potency of drugs, other laboratory studies show.
People, especially older adults taking multiple medications, shouldtell their doctor about dietary supplements, if they are using high-potency juices and teas and drinking lots of wine, Dr. Arnasonsays. He says that drugs whose labels contain lots of conditions and warnings about possible interactions with other medications are probably more likely also to interact with foods. If a food-drug Some foods appear to reduce the effectiveness of interaction is suspected, patients should stop taking the food and In work published this year, Drs. Arnason and Foster showed that various herbs including chai hu, Labrador tea,echinacea and goldenseal, can reduce the potency of Tamiflu. The researchers incubated Tamiflu by itself or alongwith herbs, together with human liver tissue, which is responsible for processing the medication in the body. Theyfound that the drug was less activated in the presence of the herbs.
The herbs are believed to proffer different health benefits. Labrador tea is thought to benefit the nervous system,Chai Hu to treat common cold and fever, and Echinacea is thought to prevent colds and have anti-tumor benefits.
Goldenseal is an anti-microbial and anti-inflammatory product.
The researchers also have studied black tea, which is touted for 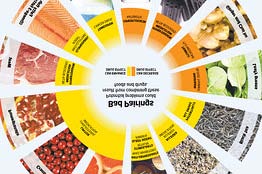 lowering blood pressure, and found that it appears to inhibit anenzyme responsible for the body's processing of many drugs. Theresult, the researchers found, is that consuming large quantities ofblack tea could potentially increase the potency of a wide range ofmedications.
Others researchers have investigated spices. In one study, piperine,one of the main components of black pepper, increased thepotency of the antihistamine Allegra in rats by two-fold compared with animals that took the medicine alone, according to a report inApril's Journal of Food Sciences.
Much of the research on teas and other foodstuffs—with the exception of grapefruit—haven't been well-studied inhumans, so the exact amount that may cause a harmful effect isn't yet known, say researchers.
Whether the alcohol from beer or wine affects the processing of other drugs isn't clear, says Cynthia Kuhn, aprofessor of pharmacology at Duke University Medical Center. It is dangerous to use alcohol in combination withsedating drugs like antihistamines, or narcotic pain medicines, because of the additive effect in the brain.
But despite strong warnings on some other drug labels that alcohol can interact in the liver to inhibit metabolism ofother medications, the evidence "is not strong," says Dr. Kuhn. Alcohol is mainly metabolized by an enzyme calledalcohol dehydrogenase, which "has nothing to do with the metabolism of most drugs," she says.
Some drugs, like dilantin, an epilepsy medication, appear to be affected by the amount of fat in the diet, accordingto a 2004 study.
Such medicines are dissolved only in fats and could therefore become less effective by a significant reduction in fatconsumption.
Experts suggest that patients considering major dietary changes, such as switching to a much lower fat diet from ahigh-fat one, should discuss the move with their doctor.

Request for Reimbursement Form HEALTH CARE FSA\HEALTH REIMBURSEMENT ARRANGEMENT (HRA) Health Care FSA: All claims must be submitted with supporting documentation containing the following: name of patient, name of provider and address, expense incurred (type of service), date of incurred expense (the date the service is provided, not when the expense is paid), and amount of expense