2006 The Japan Society for Analytical Chemistry Voltammetric Behavior and Determination of 17b-Estradiol at Multi-Wall
Carbon Nanotube-Nafion Modified Glassy Carbon Electrode
Norifumi TERUI, Bunshi FUGETSU, and Shunitz TANAKA†
Section of Integrated Environmental Science, Research Faculty of Environmental Earth Science, Hokkaido University, N10W5, Kita-ku, Sapporo 060–0810, Japan For the purpose of low cost and sensitive electrochemical detection of 17β-estradiol (E2), a multi-wall carbon nanotube(MWNT)-Nafion modified electrode was fabricated. The MWNT modified electrode shows enhancement for the anodicpeak current of E2 compared with the value obtained using a bare electrode. The anodic peak current measured by squarewave voltammetry after 5 min open-circuit accumulation was proportional to the concentration of E2 over the range of2.5 × 10–7 to 10 × 10–6 M, and a detection limit of 1 × 10–8 M was obtained.
(Received December 21, 2005; Accepted March 16, 2006)
copolymer possessing several advantages, such as ion-exchange Introduction
characteristics, thermal stability, chemical inertness andmechanical strength, and has been widely used for the MWNT 17β-estradiol (E2) is the most potent steroidal estrogen; it is modification of electrodes.21 MWNT was dispersed into Nafion produced endogenously by all mammalian species. Recently solution via ultrasonication; then the resulting homogeneous there have been many studies suggesting that estrogens are dispersion of MWNT was dropped onto a glassy carbon (GC) being released to aqueous environments such as sewage and electrode. The MWNT-Nafion modified GC electrode was river water from wastewater treatment plants. These materials obtained by evaporating the solvent of the MWNT dispersion.
are suspected of being endocrine-disrupting chemicals that can The MWNT-Nafion modified GC electrode exhibits cause hurtful physiological effects in aquatic wildlife.1,2 enhancement for the oxidation peak currents of E2 compared However, estradiols in environmental sources are present at with the results obtained with a bare GC electrode, and shows very low concentrations, and are difficult to detect. In order to significantly improved sensitivity for the determination of determine estradiols, various technologies such as GC-MS,3–5 HPLC-MS,6–8 immunoassay,9,10 and electroanalysis11–13 havebeen used.
Carbon nanotubes are novel nanometer-sized materials with Experimental
unique properties; these nanotubes have attracted muchattention.14,16 Generally, carbon nanotubes consist of two categories, single-wall carbon nanotubes and multiwall carbon MWNT (inner diameter: 5 – 10 nm, outer diameter: 20 – 40 nanotubes (MWNT), and have high electrical conductivity, nm, length: 0.5 – 50 μm) and 5% (w/w) Nafion solution were extremely high mechanical strength and relatively high surface obtained from Aldrich (USA). The standard solution of E2 (1 × area. To utilize these unique properties for electrochemical 10–2 M) was prepared by dissolving E2 (Sigma, USA) in detections, researches have reported carbon nanotube paste ethanol. All chemicals used were of analytical glade and were electrodes fabricated by mixing carbon nanotubes with mineral directly used without further purification. Solutions were oil,14 and carbon nanotube coated electrodes fabricated by prepared with deionized water obtained from Milli-Q system dispersing carbon nanotubes into suitable solvents such as As for estradiols, Hu et al. fabricated MWNT modified electrodes based on dispersing MWNTs into All the electrochemical measurements were carried out with a water containing oil of turpentine and OP TX-100; they CV-50W voltammetric analyzer (Bioanalytical Systems, Inc.
reported a high catalytic effect on the oxidation of estradiols (BAS), USA). The working electrode is a glassy carbon electrode (3.0 mm diameter, BAS). A three-electrode system In this research, we fabricated the MWNT-Nafion modified including the working electrode, a platinum wire counter electrode and demonstrated direct electrochemical electrode and an Ag/AgCl reference electrode (BAS) was measurements by square wave voltammetry with the aim of employed. All potentials were reported versus Ag/AgCl. The proposing a simple, low cost and sensitive method for the pH of buffer solutions was measured using a pH meter, F-22 determination of E2. Nafion is a sulfonated tetrafluoroethylene † To whom correspondence should be addressed.
Preparation of MWNT-Nafion modified GC electrode The MWNTs were pretreated by refluxing for 10 h in 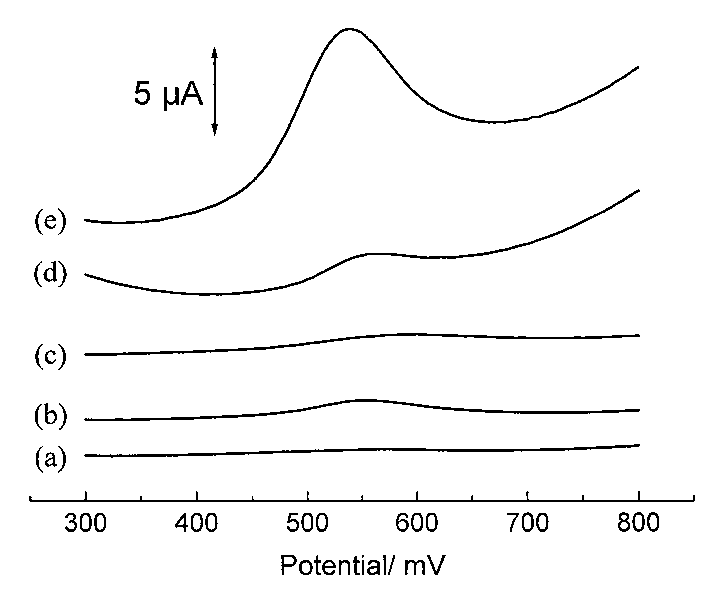 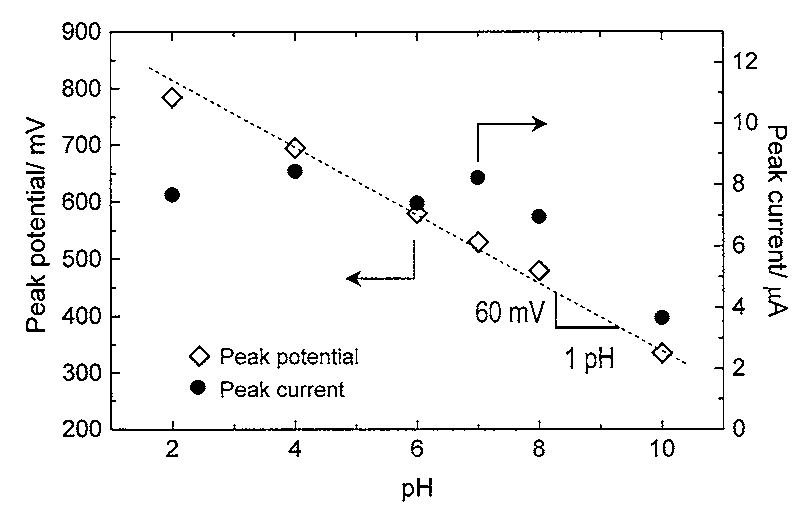 Square wave voltammograms of 1 × 10–5 M E2 in 0.1 M Influence of the amount of 1 mg mL–1 MWNT dispersion phosphate buffer of pH 7.0. The amount of MWNT is 7.5 μL. (a) At solution on the oxidation peak current of 1 × 10–5 M E2 in 0.1 M bare GCE without accumulation, (b) at bare GCE after 5 min, (c) at phosphate buffer of pH 7.0 after 5 min.
Nafion-modified GCE after 5 min, (d) at MWNT-modified GCEwithout accumulation, (e) at MWNT-modified GCE after 5 min.
voltammetry of 1 × 10–5 M E2 at pH 7.0. At a bare GCelectrode, no peak was observed without accumulation (curve ain Fig. 1). After 5 min of accumulation, only an anodic peakcorresponding to the oxidation of E2 at 0.56 V was observed(curve b in Fig. 1). At a Nafion modified GC electrode, no peakwas observed after 5 min of accumulation (curve c in Fig. 1). Incontrast, a distinct anodic peak was observed at MWNT-Nafionmodified GC electrode without accumulation (curve d in Fig.
1), and increased significantly after 5 min of accumulation(curve e in Fig. 1). MWNT has larger specific surface area dueto nanometer-sized structure and a strong adsorptive ability foraromatic hydrocarbons.14,15 the oxidation peak current of E2 is observed at the MWNT- Influence of pH on the oxidation peak potential and peak Nafion modified GC electrode. No corresponding reduction current of 1 × 10–5 M E2 in 0.1 M phosphate buffer at MWNT- peak was observed on the reverse sweep of cyclic voltammetry.
modified GCE after 5 min. The amount of MWNT is 7.5 μL.
Sadic et al. proposed that the oxidation of E2 consisted of twoelectron transfer steps followed by a chemical reaction (EC-ECreaction mechanism) and finally E2 became a non-electroactive concentrated HNO3. The 0.1% (w/w) Nafion solution was prepared by dissolving 5% (w/w) Nafion (Aldrich, USA) into corresponding reduction peak suggests that the electrode deionized water. Next, 1 mg of treated MWNT was added to 1 reaction of E2 is an irreversible process due to the accumulation mL 0.1% (w/w) Nafion solution, then sonicated for several hours until a homogeneous black dispersion of MWNT wasachieved. Prior to modifications, the GC electrode was polished with 0.3 and 0.05 μm alumina and cleaned ultrasonically for 1 The effect of the solution pH on the anodic peak current min. After that, 0 – 20 μL of 1 mg mL–1 MWNT dispersion was obtained for 1 × 10–5 M of E2 at the MWNT-Nafion modified pipetted onto the surface of a clean GC electrode, and the GC electrode after 5 min accumulation was investigated by solvent was evaporated in a dry oven.
square wave voltammetry. As shown in Fig. 2, no significantpeak current difference was obtained in the range of pH 2.0 – 8.0, and the peak current decreased at pH 10.0. On the other The MWNT-Nafion modified GC electrode was immersed hand, a peak potential shift in the positive direction with into 5 mL of 0.1 M phosphate buffer containing a known decreasing pH was observed in the pH range of 2.0 to 10.0. The concentration of E2 in an electrochemical cell. Accumulation slope of the plots of the peak potential against pH appeared to was carried out under open-circuit potential while stirring the be about 60 mV per pH unit. This suggests that equal amounts solution; the solution was then kept quiet for 10 s, and finally of proton and electron are involved in the oxidation of E2.11 In voltammograms were measured. Cyclic voltammograms were this research, pH 7.0 was selected as the optimal pH.
recorded from 200 to 800 mV at scan rate: 50 mV s–1. Squarewave voltammograms were recorded from 300 to 800 mV at pulse amplitude: 50 mV, and scan rate: 20 mV s–1.
The effect of the amount of MWNT on the anodic peak current of 1 × 10–5 M E2 for 5 min accumulation was evaluated.
The plots of anodic peak current versus amount of 1 mg mL–1 Results and Discussion
MWNT dispersion solution are shown in Fig. 3. As the amountof MWNT was increased, the oxidation peak current enhanced greatly to the peak at 7.5 μL. This enhancement of the current To investigate the electrochemical behavior of E2 at the indicates that the specific surface area and number of catalytic MWNT-Nafion modified GC electrode, we used square wave sites for the oxidation of E2 at the MWNT-modified electrode 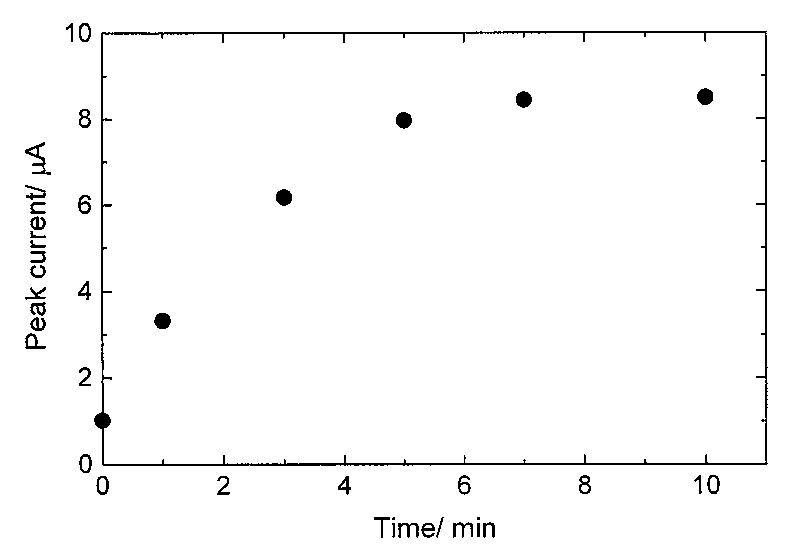 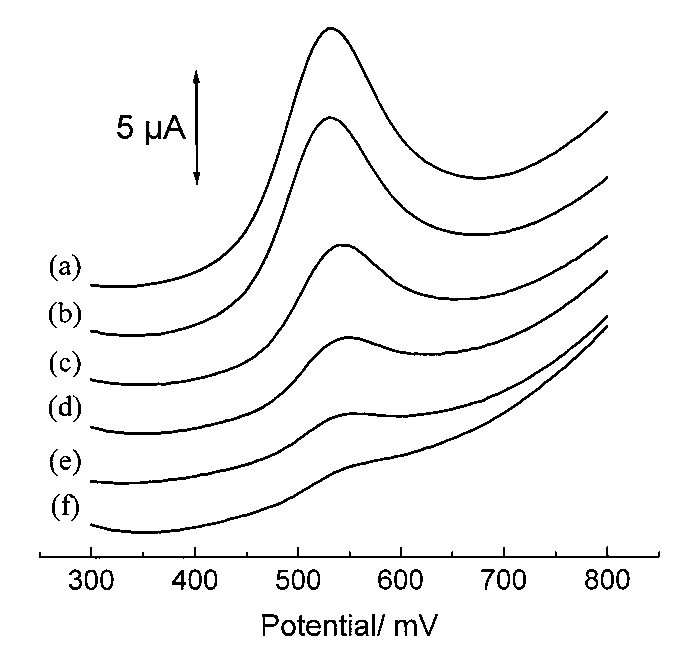