Overview of the Management of Atrial Fibrillation: What is the
PETER R. KOWEY, M.D., GAN-XIN YAN, M.D., PH.D., TARA L. DIMINO, M.D., From the Cardiovascular Division, Lankenau Hospital and Medical Research Center, and the Main Line Health Heart Center, Wynnewood, Pennsylvania, USA; and the Department of Medicine, Jefferson Medical College of Thomas Jefferson University, Management of Atrial Fibrillation. There are three fundamental approaches to the management of
atrial fibrillation (AF): rate control, rhythm control, and anticoagulation. Selecting a course of treatment
requires a thorough knowledge of these therapeutic alternatives. This article explores treatment options,
including the relative benefits of rate control versus rhythm control, which are complicated by the lack
of highly effective and safe antiarrhythmic drugs. Anticoagulation is also an important issue in AF man-
agement, and warfarin effectively reduces the incidence of thromboembolic events in AF patients. The
use of warfarin, however, presents its own complications. We conclude that individualization of therapy is
paramount when treating AF. (J Cardiovasc Electrophysiol, Vol. 14, pp. S275-S280, December 2003, Suppl.)
sinus arrhythmia, antiarrhythmic drugs, anticoagulants, atrial fibrillation, left ventricular dysfunction Introduction
AV nodal conduction, some rate control medication is nec-essary. Which drug is used and how it is delivered depends Atrial fibrillation (AF) is a complicated disease state that on several factors, including the drug’s pharmacologic pro- requires a multifaceted management approach. It is not an file, the urgency of the clinical situation, the patient’s clinical exaggeration to say that this disease requires as much clin- stability, and concomitant drug therapy and medical condi- ical skill in management as any disorder that doctors treat.
tions.1,2 In general, rapidly acting calcium channel blockers On one hand, we have learned that AF need not be treated or beta-blockers are administered intravenously when a clin- aggressively in many patients, but we also know that AF fre- ical effect is needed quickly. It is important to note that only quently is complicated by disabling stroke, an outcome worse a minority of patients who develop AF have so much hemo- than death for most patients who experience this devastating dynamic compromise that intravenous administration of AV and avoidable complication of the disease. Thus, as in no nodal-blocking agents is necessary. In the majority, a short- other condition, individualization of therapy is paramount, acting oral beta-blocker or calcium channel blocker, with a while still adhering, as best we can, to basic treatment dic- short time to effect, may suffice, with longer-acting oral con- tums derived from well-designed and well-executed clinical geners reserved for long-term clinical use. Weaker AV nodal blockers, such as digitalis, are reserved as adjuvant therapy In this article, we consider the three major components for patients whose AV nodes are diseased, when single-drug of AF treatment: rate control, rhythm control, and antico- treatment does not suffice, or for management of heart fail- agulation. Because other articles in this issue of the Journal ure.3-6 The adequacy of rate control is difficult to define, but review specific therapies, we confine this discussion to the heart rates of <80 beats/min at rest with attainment of <90% broad categories, highlighting treatment options and the trial of the maximum predicted heart rate with maximal exercise evidence to support them. For most of this discussion, atrial would be considered acceptable. Alternatively, criteria have flutter will not be discussed separately unless there are spe- been applied based on control of rate during a range of activ- cific data pertaining to that arrhythmia that are not applicable ities of daily living. It is critical, however, that optimization of heart rate be judged with the patient at rest and then duringexertion, because the rate control effect of agents such as dig- Rate Control
italis may be overcome by catecholamines, rendering the pa-tient uncontrolled during a significant portion of her/his daily The first step in the treatment of AF generally is control of routine.6,7 In those rare cases where conventional AV nodal- the ventricular response rate. In elderly patients, especially blocking agents are ineffective, such as in very ill patients, those with conduction disease, rates may be well controlled amiodarone may be useful because the drug’s earliest effect, at the onset of AF, but for the majority of patients with intact when administered intravenously, is negative dromotropismvia its noncompetitive beta-adrenergic and calcium channel-blocking effects.6 Careful rate control is paramount no mat-ter which agent is used, because high heart rates over time Supported in part by the Rose and Adolph Levis Foundation, Haverford,Pennsylvania.
may cause severe symptoms as well as profound left ventric-ular dysfunction in some individuals.8,9 This is part of the Address for correspondence: Peter R. Kowey, M.D., Main Line Health Heart rationale for considering AV nodal ablation and permanent Center, Lankenau Medical Office Building, Suite 558, 100 Lancaster Av- pacemaker implantation in select patients who also may be enue, Wynnewood, PA 19096. E-mail: [email protected] suffering from severe symptoms caused by the rapidity and irregularity of their arrhythmia.8 The relative benefits of rate 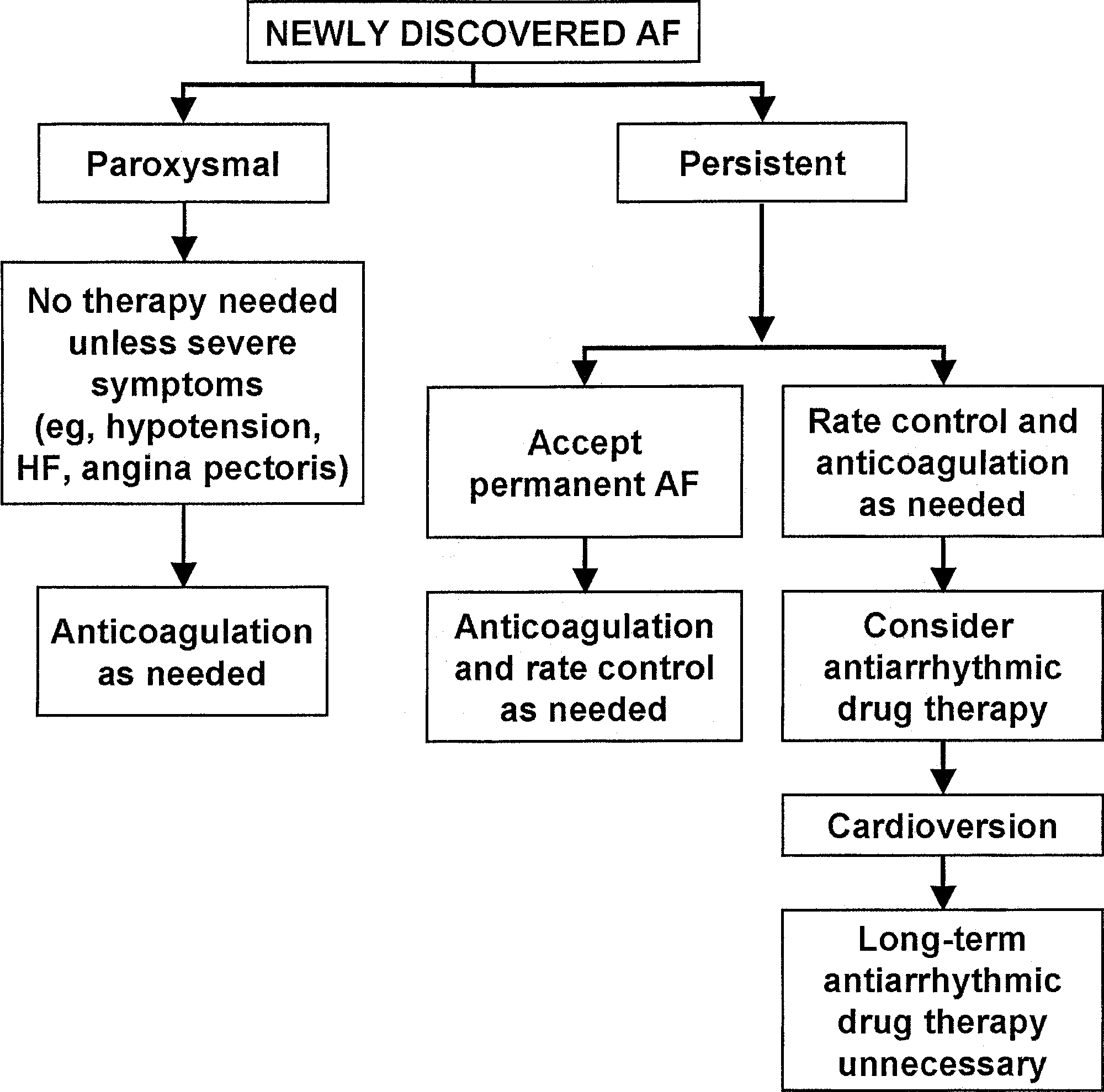 Journal of Cardiovascular Electrophysiology
Vol. 14, No. 12, Supplement, December 2003 Pharmacologic conversion, although less effective, has the potential of better patient acceptance and wider applicabil-ity. It is important to note that, in general, drugs are moreefficacious for converting AF of shorter than longer dura-tion. In fact, very few drugs have been systematically studiedand approved for this indication. Class IA and IC drugs havebeen used intravenously and orally with good reported suc-cess. The Class IC drugs appear to be effective and safe fortermination of AF of relatively recent onset in patients withnormal or nearly normal hearts, and they can be used eitherorally or parenterally.20-22 However, the drugs approved forthis indication are intravenous ibutilide and oral dofetilide,both Class III antiarrhythmic drugs. Ibutilide has no oral con-gener and thus is limited to acute therapy only. It appears towork better in patients with arrhythmias of relatively recentonset and has greater efficacy in atrial flutter.23,24 Its prin-cipal liability is torsades de pointes, which occurs in 2% to4% of patients and is more likely in women, the elderly, andpatients with left ventricular dysfunction.25-27 Dofetilide wasapproved for this indication based on its record of effective-ness in patients hospitalized for oral drug loading. Conversionto SR occurs in 30% of patients with persistent AF comparedwith a placebo conversion rate of about 1% to 3%.28 As with Figure 1. An approach to the management of “new” atrial fibrillation, as
ibutilide, dofetilide’s principal liability is torsades de pointes, previously published in the ACC/AHA/ESC guidelines.10 (Reproduced with which fortunately happens early in dosing while the patient permission from Fuster V, Ryden LE, Asinger RW, et al.; American College is under observation.25,27,29 of Cardiology/American Heart Association Task Force on Practice Guide- Other drugs have been used for acute conversion of AF lines; European Society of Cardiology Committee for Practice Guidelinesand Policy Conferences (Committee to Develop Guidelines for the Manage- without convincing demonstration of effectiveness. Amio- ment of Patients with Atrial Fibrillation); North American Society of Pac- darone has gained popularity for this indication. Although ing and Electrophysiology: ACC/AHA/ESC guidelines for the management many previous studies were unconvincing as to amiodarone’s of patients with atrial fibrillation: Executive summary. Circulation 2001; efficacy for this indication,30 more recent data have sug- gested that infusion of high doses for several hours mightbe useful.31 Spontaneous conversions in this populationoccur with such variable frequency that carefully done, control versus rhythm control will be considered in a subse- large, placebo-controlled trials are essential before any con- clusions can be reached about the efficacy and safety ofdrugs for this indication. Amiodarone’s peculiar pharmacoki- Rhythm Control
netic profile makes such studies difficult to execute and tointerpret.
The other broad strategy in AF management is mainte- Proper anticoagulation prior to and following cardiover- nance of sinus rhythm (SR) (Fig. 1).10 This approach has two sion is a key item in its safe implementation. Fortunately, parts: restoration of SR for patients whose AF is persistent, we now have good data on which to base firm recommenda- and chronic treatment to prevent AF recurrence. Conversion tions about the proper use of anticoagulant therapy to prevent of AF to SR can be accomplished electrically or pharma- stroke and other thromboembolic events.30 These recommen- cologically. Electrical conversion is well established, highly dations will be presented in the section on anticoagulation effective, and generally safe, especially when carried out electively. Emergent cardioversion is an uncommon event, Chronic maintenance of SR remains the major challenge because most patients can be rendered stable with acute rate in this realm. To date, we have not seen the development of control and measures to treat an underlying disease process.
any antiarrhythmic drug with sufficient efficacy and safety This is fortunate, because patients frequently are not pre- to allow us to administer it with confidence to a broad sam- pared properly for cardioversion, having recently eaten and ple of patients. It is important to remember that even with not being properly anticoagulated. In addition, emergent car- optimal therapy, drug treatment is rarely “curative.” In most dioversion is plagued with a very high relapse rate because cases, the most we should expect is a reduction in the fre- the conditions that led to the arrhythmia still are present.11,12 quency, duration, and severity of the events, which may be For elective cardioversion, with good technique including the adequate in some patients to improve their quality of life use of biphasic waveform devices and adequate anesthesia, and to allow them to pursue their usual activities.32 In addi- >95% of patients can be shocked into SR.13-15 Unfortunately, tion, antiarrhythmic drugs have the potential for toxicity. The early recurrence of AF and late relapses are not uncommon best we have been able to do is to describe safety and effi- and occur as a consequence of concomitant cardiac or elec- cacy in carefully defined patient populations to allow physi- trical disease and other factors, the most important of which cians to prescribe one or another agent depending on the may be the duration of the antecedent arrhythmia.16,17 Pre- individual patient profile. For example, it is important to dis- vention of early or late relapses usually requires predosing tinguish between paroxysmal and persistent AF, because the with antiarrhythmic drugs or beta-blockers.5,6,11,12,18,19 former frequently causes severe symptoms in young active