Pge mineralisation of the bohemian massif, czech republic: an overview

Dissolution of chromitite ore for Platinum Group Elements and Gold Analysis, Ray-Iz Ophiolitic Complex, Polar Urals. Geological Survey of Finland, Betonimiehenkuja 4, 02151 Espoo, Finland Geological Survey of Finland, Betonimiehenkuja 4, 02151 Espoo, Finland ABSTRACT. The dissolution of chromitites from the Ray-Iz ophiolitic complex in the Urals,Russia, was studied. On the basis of previous analysis results, gold was suspected not to dissolve from the chromitites. The composition of chromite in the rock and in the silicate slagfrom nickel sulfide fire assay was compared. The chromite in the rock had chromium content a third higher than in the silicate slag. The primary chromite was melted during fusion and a secondary chromite crystallized. Gold was found in the silicate slag, but mainly separate from the chromite grains. Chemical analysis results will show if better recovery of gold is received when Na3B4O7 in the fusion flux is replaced with Li2B4O7.
work, Li2B4O7 was used instead of sodium tetraborate Na3B4O7.
Dissolution of chromitites is known to be problematic (Borthwick & Naldrett 1984, ophiolitic complex in the polar Urals in Asif & Parry 1990,). Chromitites are Russia. The other Ural ophiolites are Voikar- elements. Hence it is crucial to dissolve them Kempirsai. The first two as well as Ray-Iz completely so that high recovery of the PGE contain large chromite deposits (Kojonen et may be achieved. Different mixtures of al. 2003). fusion reagents have been used for the fusion of chromitites, using nickel sulfide fire assay effective dissolution sodium metaphosphate (NaPO4) (Bédard & Barnes 2002) or lithium tetraborate (Li2B4O7) (Borthwick & Naldrett dissolution of the chromitite samples. The1984, Robért 1987, Zereini et al. 1994) is samples were crushed to 100 microns. A added to the fusion mixture. For the sample weight of 15 grams was mixed with dissolution of the chromitites in the present the following fusion reagents: 30g Li2B4O7, 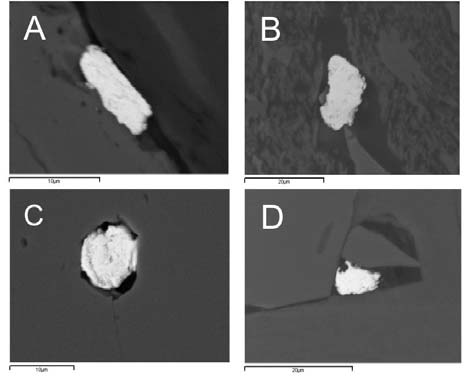 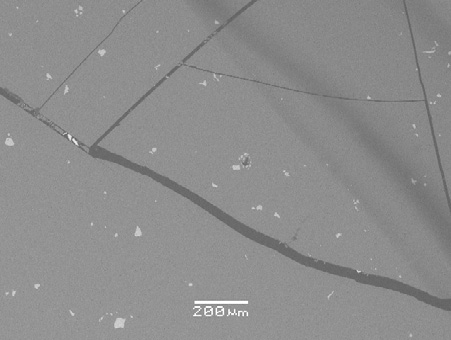 Table 1. Chemical composition of chromite quartz. The mixture was placed in a ceramic Silicate slag (n=8) chromitite (n=40) Crucible (n=3) crucible and fused in 1100qC for 90 minutes.
The nickel sulfide bead was separated from Cr2O3 the silicate slag. The bead was collected for MgO dissolution in hydrochloric acid and the slag Na2O from three samples was recovered for optical SiO2 and scanning electron microscope analysis. Polished sections were made of the silicate slag for study with a scanning electron microscope (SEM) Jeol JSM-5900 LV combined with an energy dispersivespectrometer (EDS) Oxford InstrumentsLink.
lot of chromite grains in the silicate slag (Fig. 2). To find out if the grains were unmeltedremainings of the rock, the chemicalcomposition of the chromite in the silicate Figure 1. Au in fissures (A, B and D) and as slag and in the rock were compared. The an inclusion (C) in chromite, SEM backscattered electron images (BE). Scale chemical compositions were almost identical bars are 10Pm (A, C) and 20Pm (B, D).
concerning FeO, MgO and Al2O3 (Table 1).
The chromium content was in average 30% higher for the fresh chromium. The chromium in the silicate slag had moderatelyhigh content of Na2O and SiO2, while thechromium in the rock lacked these compounds completely.
The ceramic crucibles that were used to the fusion contained a lot of chromite and zircon minerals. The chromites were situated in a certain radius from the silicate slag forming a border to the zircons (Fig. 3). The chromiumcontent of chromite in the crucible is in Figure 2. Chromite (light gray) in silicate slag (dark gray), SEM, BE-image.
between the chromium content in the rockand in the silicate slag (Table 1). The contents of FeO, Na2O and SiO2 are lower than in the slag. 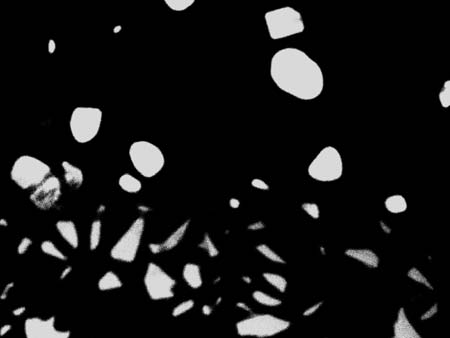 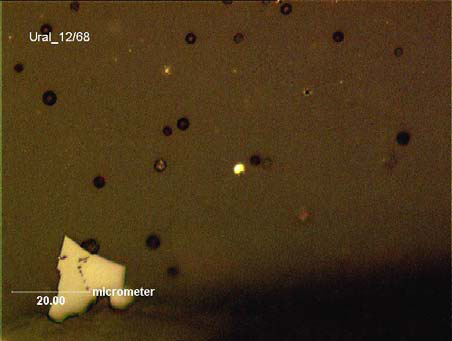 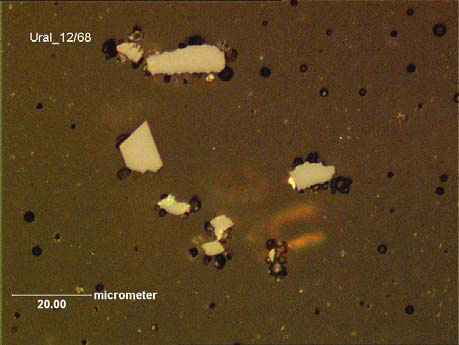 Platinum group compounds and gold Native gold has been found in chromitite of Ray-Iz as inclusions in chromite (Kojonen et al. 2003) (Fig. 1). In the present study somegold grains were present. The gold however occurred as free grains in the slag (Fig. 4) or intergrown with chromite (fig. 5). -The chromitite was dissolved during the Figure 3. Chromite (gray) and zircon (white) fusion process using Li2B4O7 as a fusion with a background of ceramic material (black). The size of the scale bar is 20 -Secondary chromite crystallized after the microns, SEM, BE-image.
fusion-Gold that originally was in fissures or asinclusions in chromite is separated from the chromite during melting, but staying in thesilicate slag-All PGE were dissolved using lithium tetraborate as fusion reagent.
-The melt penetrated into the ceramiccrucible leaving chromite grains among the zircon Asif, M. & Parry, S.J. 1990. Nickel sulphide fire assay Figure 4. Au (white) and chromite (gray) in for the collection of the platinum group elements silicate slag, optical image, reflected light. and gold from chromitites using reduced bead size. Mineralogy and Petrology, 42, 1-4, 321-326.
Bédard, L.P. & Barnes, S-J. 2002. Ruthenium recovery in chromitites by NiS-fire assay. 9th internationalplatinum symposium (abstract).
activation analysis for platinum group elements andgold in chromitites. Analytical Letters, 17, 265-275.
Kojonen, K., Zaccarini, F. and Caruti, G. 2003. First finding of native gold in the chromitites of the Rai-Iz ophiolitic complex, Polar Urals. GeophysicalResearch Abstracts, 5 Robért, R.V.D. 1987. The use of lithium tetraborate in the fire assay procedure with nickel sulphide as thecollector, Mintek Report. M324, 1-9.
Zereini, F, Skerstrupp, B. and Urban, H. 1994.
Comparison between the use of sodium and lithium Figure 5. Au (white) attached to chromite (gray), optical image, reflected light.
determination by nickel sulphide fire assay

A registered dietitian can be very helpful in providing Gastroparesis Diet The purpose of the gastroparesis diet is to reduce Medications symptoms and maintain adequate nutrition and fluid intake. Step 1 is used when symptoms are more severe and The two most common types of drugs prescribed to you may advance to Steps 2 and 3 as symptoms improve. treat gastroparesis are anti-emetics and