PARTNERS _________________
DATE___________________
SPECTROSCOPY: A KEY TO ELEMENTAL IDENTITY
This activity is designed to introduce visible light spectroscopy as a means of identifying elements and providing information on atomic structure. INTRODUCTION

Many areas of science, medicine, and criminalistics rely heavily on the ability to determine the
composition of materials. It is not always possible or easy to do this with chemical tests that rely
on chemical changes. It is known that matter interacts with electromagnetic radiation (such as
visible light or x-rays) with measurable results. Sometimes an action on a substance (such as
subjecting it to an electrical current) will generate electromagnetic radiation. Techniques that
measure radiation- matter interactions are called spectroscopy.
PRODUCDURE

GOGGLES ON!
1.
Take a platinum inoculating loop and place it in a Bunsen burner flame. Heat the loop until the metal glows red and no more color is imparted to the flame from the loop. Dip the loop into a solution of lithium sulfate and place the loop back in the flame. What
do you observe? Record your results in the data table below. Continue to heat the loop
until no more color is seen in the flame. This technique is called a flame test.
Repeat the procedure with solutions containing calcium, copper, sodium, potassium, and strontium. When you look at the one containing potassium, look at the flame through a piece of cobalt glass (deep blue). This will eliminate any color from sodium (which is difficult to separate from potassium in chemical processing) that may mask the color of the potassium flame. Exploring the Chemical World, PGCC, 2003 DATA TABLE FOR FLAME TEST
OBSERVATION
Test solutions containing Unknowns 1 and 2. Record observations in the table above. What does Unknown 1 contain? __________________________________________ What does Unknown 2 contain? __________________________________________ Explain how you arrived at your conclusions. Exploring the Chemical World, PGCC, 2003 What do you think would happen if you had both sodium and lithium in the flame at the same time? You can try out your guess by mixing a few drops of each in another container and placing the result in the flame. If you were observing the sodium- lithium mixture without knowing what was in it would you be able to tell that it contained both elements? Explain. What do you think is the specific source of the color for each element when it is introduced into the flame?
There are problems associated with flame tests as you may have been able to determined from
the procedure above. When two or more elements are present, the light from one may mask the
color from another. Some elements do not impart a significant color to a flame or the color
cannot be distinguished from another element.
Chemists can work around these problems by using devices other than the naked eye to make
observations of the interaction of energy with matter. The next section employs a device known
as a diffraction grating. A diffraction grating separates any light entering it into the
wavelengths that make up that radiation. The resulting pattern is called a spectrum. Chemists
use a spectroscope or spectrometer that incorporates a diffraction grating. The instrument you
will be using is a pair of glasses with special lenses made of diffraction grating. Because these
glasses were designed for entertainment, you will see multiple images of the spectral pattern.
BE CAREFUL OF THE EQUIPMENT USED IN THIS SECTION. THE BULBS ARE
VERY FRAGILE AND ARE ENERGIZED BY A HIGH VOLTAGE SOURCE. DO NOT
TOUCH THE TUBES OR THE POWER SUPPLY.

7.
Put on the glasses and look at any source of light (sunlight or overhead light). What do you observe? Exploring the Chemical World, PGCC, 2003 Look at the power supply containing the hydrogen tube with your glasses on. How is it different than the other light source? Record the colors as you see them. Use colored pencils to draw the pattern in the data chart that is attached. Now look at the tube containing the helium in another power supply. Is it the same or different? How? Repeat the same process with the tubes containing mercury, neon, and nitrogen. LINE SPECTRUM
Exploring the Chemical World, PGCC, 2003 What did you notice that was the same about all samples? What did you notice that was unique about each element? Could you say that all red lines or green lines were the same in each element tube? Why or why not? If they are not the same, is there a way you could devise to characterize one red line from another? Explain. What you are seeing is an atomic phenomena. What do you think is causing the pattern based on what you know about atomic structure? Explain why you think your idea is reasonable. Try to figure out what elements are in Tube X and Z. Repeat the procedure you did before using the tubes containing Elements X and Z. These tubes contain two of the five elements you saw before. Exploring the Chemical World, PGCC, 2003 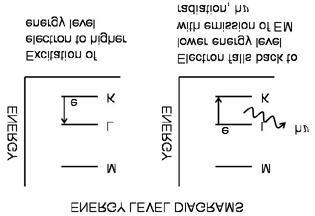 What is Element X? ____________________________________________ Why is Element Z? _____________________________________________ The process in this section is the same one involved in flame tests for identifying chemical elements in solutions. In flame tests, however, the lines are blended by your eye and register as one color. You lose the distinctive information the diffraction grating provides. Early spectroscopy (1860) by Bunsen and Kirchloff discovered the elements cesium and rubidium using a flame and spectroscope for light separation. Their spectroscope contained a prism rather than diffraction grating. All matter is composed of atoms with protons and neutrons in the nucleus and electrons in orbit around the nucleus. Neils Bohr used the distinctive pattern of lines emitted by an atom to infer that the electrons orbit the nucleus in specific energy levels (see Bohr notation on diagram) or atomic orbits. When an atom is excited by heat or electricity its electrons become excited an orbit the nucleus at a higher energy level (further Exploring the Chemical World, PGCC, 2003 away from the nucleus). The electrons will lose the energy and fall back to their original levels.
Because the levels are at set energies, the transition from one level to another in a given atom
will always require the same amount of energy (hence the repeatable pattern of lines).
The visible light energy released is given off in a distinctive colored pattern called a spectrum
(pl. spectra). Many other spectral lines appear in the non-visible wavelengths too, such as the
UV or IR regions. Each different atom or element has its own unique spectrum. Molecules also
have spectra but because molecules are more complex, their patterns are often bands (as seen for
nitrogen) rather than thin lines.
Because color is a subjective observation, scientists need to use a more precise way to identify
the lines in a spectrum. Each line represents a unique energy of electromagnetic radiation and
can be assigned a wavelength based on that energy. If you want to identify an element, you look
for lines at the unique wavelengths that characterize that element.
The equation shows the inverse relationship between energy (E) and the wavelength (λ), where h
is Planck’s constant and c is the speed of light.

The electromagnetic spectrum showing the ranges of wavelength and energy is given in a table
on the next page.
Ionizing radiation is electromagnetic radiation with enough energy to remove an electron from
an atom or molecule. The average required energy is about 35 eV, hence the higher energy
range of UV radiation can cause ionization. When an electron in an orbital is raised from a
lower to higher energy level but is not removed, the process is called excitation. The atom is
referred to as excited.
Some of the energies (or wavelengths) of electromagnetic radiation overlap as with x-rays and
gamma rays. The difference is the source of origin: x-rays are produced by an inner electron
transitions; and gamma rays are emitted from the nucleus.
Exploring the Chemical World, PGCC, 2003 POST-LAB QUESTIONS
What would you expect to see in a flame and using a spectroscope if you had a sample that contained both hydrogen and mercury? Why? If you were trying to identify an element in a sample from a patient could you use a single line from the spectrum? Why or why not? Exploring the Chemical World, PGCC, 2003 Can you think of reasons or situations in which a flame test might be used rather than spectroscopy using a diffraction grating? Explain. What is the minimum wavelength in nanometers (nm) of ultraviolet light that can cause ionization if the average energy required for ionization is 35 eV? Would an ion, such as Na+, have a spectrum? Explain why or why not. Exploring the Chemical World, PGCC, 2003 Exploring the Chemical World, PGCC, 2003

Pastoral Letter, Second Sunday of Easter (Low Sunday) 2012 My dear people of Arundel & Brighton, One of the signs that there is little real news about is the emergence of stories in the media that are of little real significance but of minor interest, and can be understood easily. One of these before Easter was the amount of packing that goes into – or rather around – Easter eggs. It