CComparison of albuterol delivered by a metered dose inhaler with spacer versus a nebulizer in childrenwith mild acute asthmaSuzanne Schuh, MD, FRCP(C), David W. Johnson, MD, Derek Stephens, MSc, Sheilagh Callahan, RN,Patricia Winders, RN, and Gerald J. Canny, MD, FRCP(C) Objective: In children with mild acute asthma, to compare treatment with
a single dose of albuterol delivered by a metered dose inhaler (MDI) with a tremely portable, and less time-con-suming to use compared with nebuliz- spacer in either a weight-adjusted high dose or a standard low-dose regimen Study design: In this randomized double-blind trial set in an emergency
department, 90 children between 5 and 17 years of age with a baseline forced expiratory volume in 1 second (FEV ) between 50% and 79% of pre- dicted value were treated with a single dose of albuterol, either 6 to 10 puffs (n = 30) or 2 puffs (n = 30) with an MDI with spacer or 0.15 mg/kg with a Results: No significant differences were seen between treatment groups in
the degree of improvement in percent predicted FEV (P = .12), clinical score, respiratory rate, or O saturation. However, the nebulizer group had a significantly greater change in heart rate (P = .0001). Our study had 93%power to detect a mean difference in percent predicted FEV of 8 between See related articles, p. 5
and p. 28.
Conclusion: In children with mild acute asthma, treatment with 2 puffs of
albuterol by an MDI with spacer is just as clinically beneficial as treatment
with higher doses delivered by an MDI or by a nebulizer. (J Pediatr asthma has not been determined. Mostprevious research articles examiningthe issue of dosage have dealt with Inhaled β2 agonists are first-line ther- delivery to the lung.1-3 In contrast, me- From the Divisions of Emergency, Clinical Pharmacology, Chest, and Clinical Epidemiology, the Department of Paediatrics, The Hospital for Sick Children, University of Toronto, Toronto, Ontario, Canada.
Supported by grants from Physicians’ Services Incorporated, Trudell Medical, The Hospital for Sick Children Foundation and Department of Paediatrics, The Hospital for Sick Children.
Submitted for publication Feb 2, 1998; revisions received Sept 29, 1998, and Jan 26, 1999; ac- Reprint requests: Suzanne Schuh, MD, FRCP(C), Emergency Department, The Hospital forSick Children, 555 University Ave, Toronto, Ontario, Canada M5G 1X8.
9/21/97894
both in the inpatient setting12 and in the arriving in the ED with a relatively mild guishable by taste, color, or smell.
ceived 6 to 10 puffs (100 µg/puff) of al- tients this sick with only 2 puffs of al- sure adequate recovery between puffs.
<25 kg received 6 puffs, those between tential confounding effects, neither cor- the ethics committee of the hospital.
the study was percent predicted FEV .
Jet, Intec Medical, Engelwood, Colo).
ed respiratory rate, heart rate, room air evaluated each child for study eligibili- 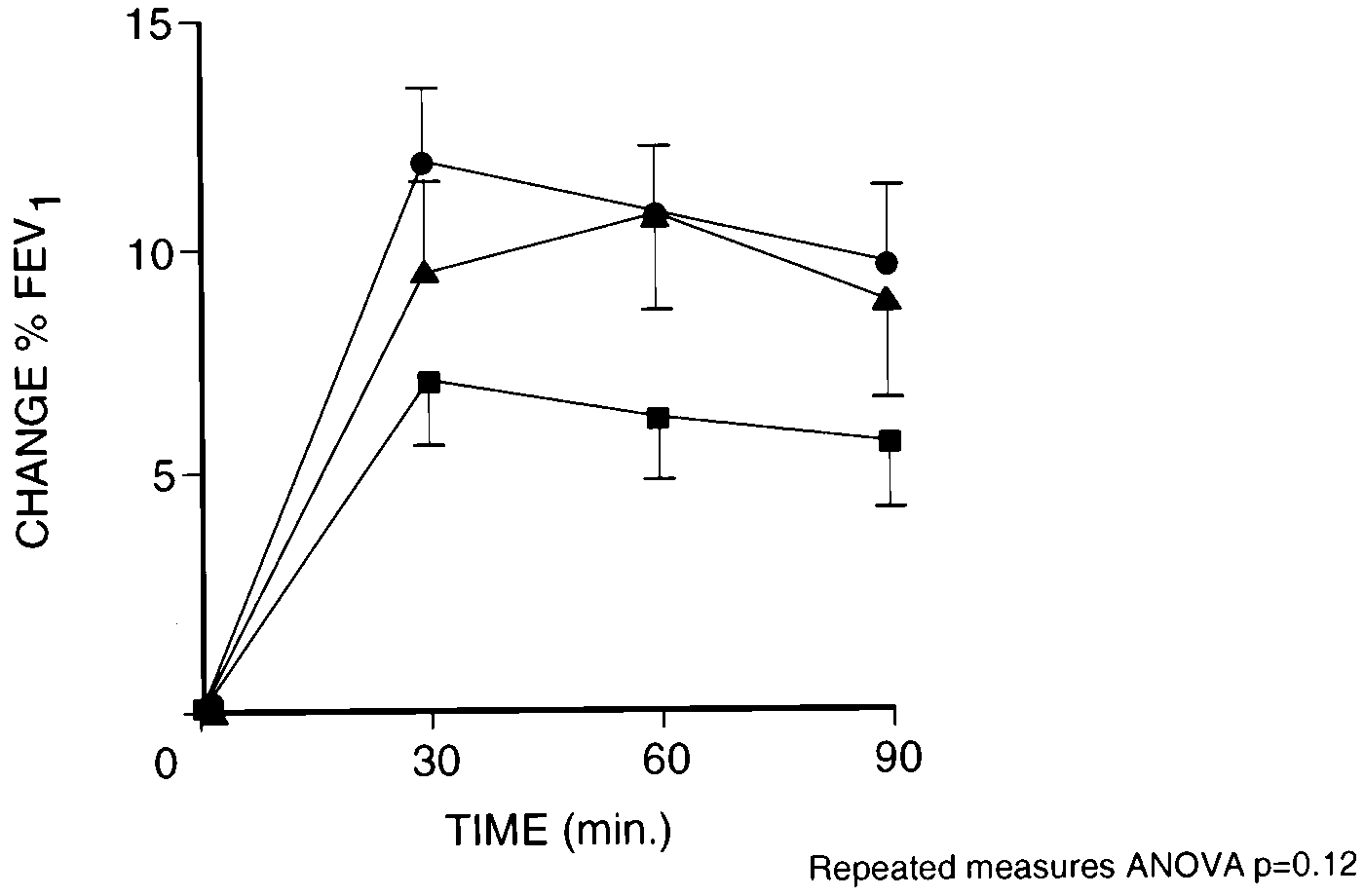 buterol use within 4 hours, 9 childrenwith associated medical problems, 6children whose families had a limitedcommand of the English language, and23 who refused to participate. A totalof 394 subjects were excluded becauseof arrival outside of study hours and 11children who were missed because thestudy nurses were not notified.
30 were randomized to each of the 3groups. Randomization producedgroups that were equivalent with re-spect to demographics, baseline severi-ty, history of present illness, history ofhospitalizations, atopy, or medicationstaken before arrival (high dose group,mean age 9.1 years, baseline FEV1 Fig 1. Mean absolute improvement (±SEM) of percent predicted FEV from baseline in groups. Closed
triangles, wet nebulizer. Closed circles, high-dose MDI group. Closed squares, low-dose MDI group.
volved in the study. Side effects report- control group of 10, an α of .05, and a β lent” responder if the percent predicted baseline to 90 minutes and as a “poor” significant differences (Fig 1). Inclusion of the subjects’ weights and their base- the diagnosis of wheezing in our ED.
comes are listed in the Table. No signif- rate at each assessment time (Fig 2).
<50, 58 children who had no history of 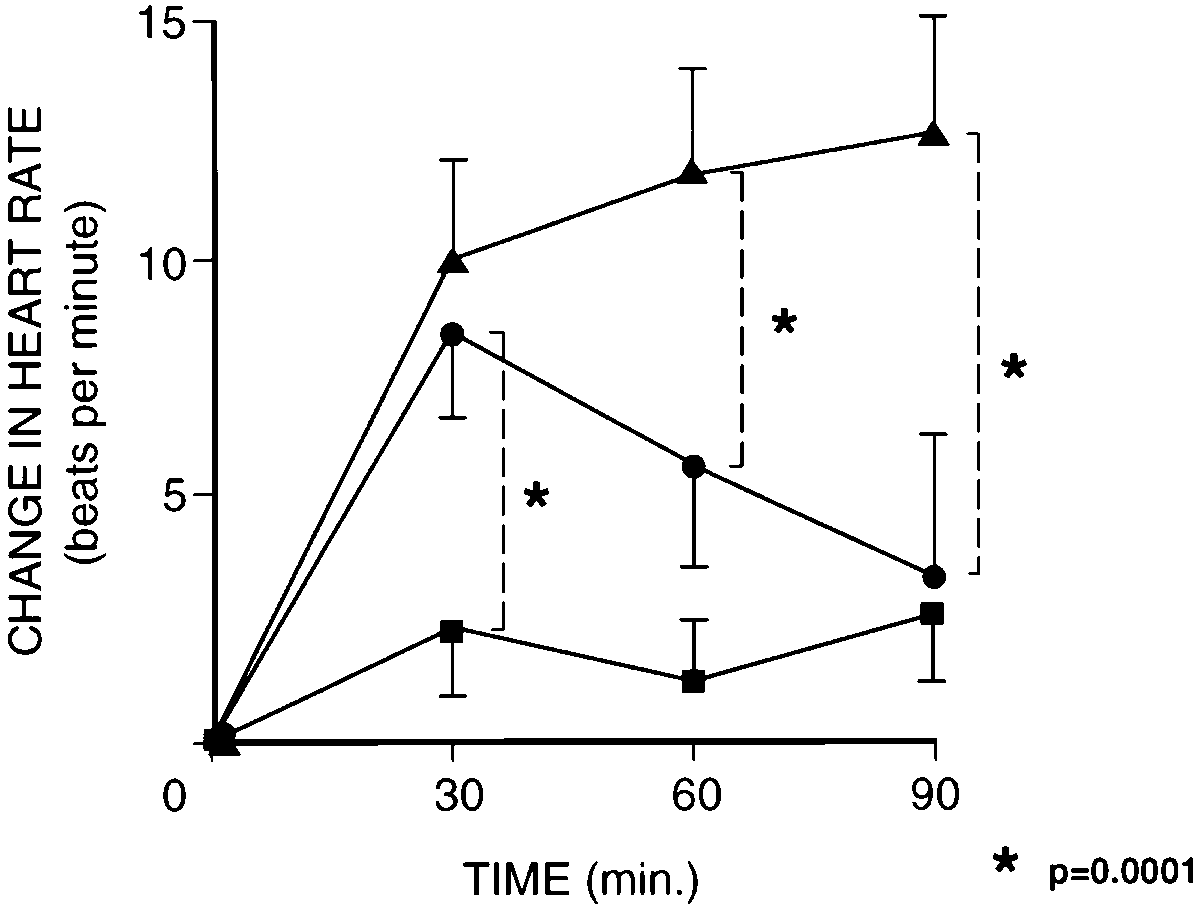 total of 31 children responded “poor-ly”: 11 (37%) of 30 in the high dosegroup, 13 (43%) of 30 in the low dosegroup, and 7 (23%) of 30 in the nebu-lizer group (P = .23). At the conclusionof the study, 53 children received morethan 1 further nebulization of albuterolin the ED (17 [57%] of 30 in the highdose group; 22 [73%] of 30 in the lowdose group, and 14 [47%] of 30 in thenebulizer group; P = .11).
steroids while in the ED: 16 (53%) inthe high dose group, 18 (60%) in thelow dose group, and 13 (43%) in thenebulizer group (P = .4). Dischargemedications included oral cortico-steroids in 56 patients (18 [60%] in the Fig 2.
Mean increase in heart rate (beats per minute ± SEM) from baseline in groups. Closed trian- gles, wet nebulizer. Closed circles, high-dose MDI group. Closed squares, low-dose MDI group.
dose group, and 19 [63%] in the nebu-lizer group) and inhaled cortico-steroids in 49 children (19 [63%] in the Table. Secondary outcome measures: mean changes (±SD) from baseline to
dose group, and 15 [50%] in the nebu-lizer group).
tending physicians’ clinical judgment(9 in the high dose group, 13 in the lowdose group, 7 in the nebulizer group;P = .17). Six children were hospital- tal therapy, and all side effects had re- DISCUSSION
ing10 or single blinding,12 use of subjec- period.13,20 Most of these trials suggest 6. Prior JG, Nowell RV, Cochrane GM.
are consistent with those of Tal et al,22 delivered to lung receptors from a me-tered-dose inhaler and nebulizer solu- tions. The mild baseline severity of dis- tered dose inhaler with Inspirase inhospitalized asthmatic patients. Chest dose MDI groups had any side effects.
with a spacer in the pediatric emer-gency department. Am J Dis Child dren with acute asthma. Med J Aust1989;151:406-8.
“excellent” and more “poor” respon- MDI with a spacer or by a nebulizer.
We thank Dr Allan Coates for his helpful com- ments, our medical and nursing colleagues for their cooperation, and Michelle McKenna and Andrea Giggey for typing this article. O’Brodovich H, Reisman J, Bentur L,Canny G. Comparison of nebulizer vs REFERENCES
provement of pressurized aerosol de-position-with nebuhaler spacer device.
New York: John Wiley & Sons; 1986.
haler and nebulizer in acute asthma.
21. Chow K, Cunningham SJ, Crain EF.
performance. Chest 1996;110:498-505.
50 Years Ago in The Journal of Pediatrics
SEROTHERAPY IN PERTUSSIS
Place EW, Keller MJ, Shaw EW. J Pediatr 1949;34:699-710 Place et al report a prospective comparative study of hyperimmune serum therapy versus no therapy in 150 children hospitalized because of pertussis at Boston City Hospital in 1946 to 1947. Roughly equal numbers of children were as-signed to 4 intervention groups—to receive serum from hyperimmunized horses or rabbits, human serum, or no thera-py. An attempt was made to match across intervention groups for age and severity of illness. The intervention assign-ment was not blinded, and no placebo was used. Surprisingly few and only mild reactions occurred in children givenhorse or rabbit serum. Although pertussis agglutinating antibody titers rose immediately after doses of antiserum, noclinical benefit was noted in any intervention group compared with the control group. Investigators were more im-pressed with the beneficial effects of sulfonamides and the newly available penicillin on the course of secondary pneu-monia and otitis media.
Interest in antiserum (especially rabbit-derived) therapy against pertussis had been building over the decade before publication of this more scientific study. Results of this study, as well as a dramatic reduction in pertussis after intro-duction of whole-cell pertussis vaccine, were probably responsible for waning interest in antiserum therapy. As withmany other partially controlled infectious diseases, waning interest outstripped waning disease. Pertussis has not beeneliminated. Pertussis has, in fact, increased in the United States since 1976, when a low number of cases (1010) werereported. Changing epidemiology has made infants under 6 months of age most susceptible to infection and vulnerableto excessive morbidity and mortality. Re-enter hyperimmune globulin therapy stage left. With substantive evidence ofpertussis as a bacterial toxin-mediated disease, the 50-year-old question is being asked again. A Phase III efficacy trialis ongoing at several sites in Canada and the United States under the Orphan Drug Program of the US Food and DrugAdministration. The trial is designed to evaluate, in hospitalized children with pertussis, the clinical effectiveness of in-travenously administered, purified immune globulin derived from adult volunteers immunized with a pertussis toxoidvaccine. This time around, double-blind, saline placebo–controlled methodology is being used, and paroxysmal cough-ing episodes are being defined by a “smart” Physiac Monitor (Physio Analytics, Newton, Mass) programmed to betripped by audio or respiratory changes compatible with a paroxysm of coughing. Stay tuned.
St. Christopher’s Hospital for Children